After reaching 50 and then 100 in a Test innings against the West Indies earlier this year, he made a signal with his upturned hand that he said was in part to dedicate the milestones to rhino conservation, and held his bat out to show a sticker on it bearing the name of a rhino conservation foundation. He repeated the message after the match.

Rhinos, evidently, were worth his while. People? Not so much. 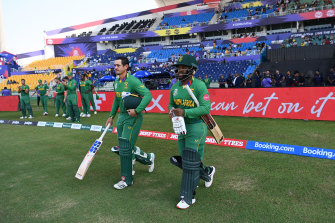 Quinton de Kock heads out to the middle for South Africa’s match against Australia alongside his captain Temba Bavuma.Credit:Getty Images

Rather than abide by a Cricket South Africa edict that all players will take the knee henceforth in the now well-understood gesture of solidarity for anti-racism, de Kock chose to stand out of a World Cup match against the West Indies on Tuesday. Now the future of the star wicketkeeper-batsman and former captain in international cricket is murky.

De Kock also plainly understands that international sport is a performance, its forums stages. You could not be a sportsperson in South Africa and not grasp this. Through the grim years of apartheid isolation, it was through sport that the country tried to demonstrate its progress towards racial inclusion.

When at last the walls came down and Nelson Mandela became president, it was he who at the 1995 rugby World Cup donned a Springbok jersey, thitherto a symbol of white supremacy. Now there was a gesture.

In the quarter-century since, the issue of racial inclusion in sport has never been far from the forefront in South Africa. It’s been a bumpy journey.

Since American footballer Colin Kaepernick first took a knee in 2016 to protest the treatment of black people, sport has become a crucible. The cause now is racial inclusion through sport. The infamous death of George Floyd in the US last year has amplified it. It is now common for sportspeople around the world to take the knee before they play. 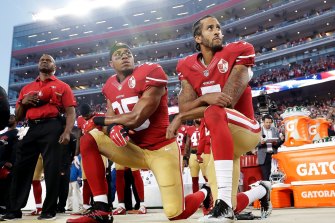 Colin Kaepernick, right, takes a knee during the US national anthem at an NFL game in 2016.Credit:AP

It’s only a gesture, but if you want to see the power of gesture in its obverse form, have a look at the shot of South Africa before their previous match against Australia. On the sidelines, some players are standing to attention, some raising clenched fists, but only three are kneeling. Two have their hands defiantly behind their backs. De Kock, who was already at the crease, also stood.

It’s a picture that tells 1000 words, and they’re mostly in Afrikaans. It’s the image of a country divided still on its most fundamental principle. De Kock’s non-gesture is itself a gesture. It says, white rhinos, I’ve got your back; black people, please yourselves. 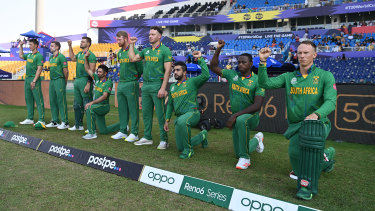 South African players before their match against Australia.Credit:Getty Images

Of all people, it had to be a white South African who demurred. Of all countries, it has to be the West Indies who were made the fall guys. To date, these latter-day West Indians were biting their tongues. It’s not hard to imagine what Viv Richards would have said.

Taking the knee is only a gesture, and that’s the point. A gesture is a simple act that asks nothing of the performer other than their endorsement and yet can have great and lasting impact. Taking the knee requires no more effort than, say, making the sign of the cross, or giving a shoutout to rhinos. 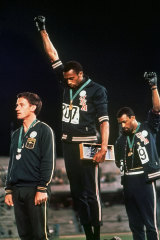 The power of gesture. Credit:AP Photo

It might have lost some of its original force, but it could hardly be called token. Watch and listen to some of the reaction it stirs up around the world, and see that it is still exercising minds strenuously.

It’s hard to rationalise de Kock’s objection. Doubtlessly, he thinks it is conscientious, but how so?

The internet teems with justifications. It’s his own business and no one else’s (aka the Novak Djokovic defence). How can an effort to address a universal failing be a private matter? It doesn’t accord with his personal moral code. Does that code not acknowledge racism and its pernicious effect? It’s a denial of his free will. Tell that to the millions even in his own country who’ve never been truly free.

Last year, de Kock stood out of the game for a while for mental health reasons. He cited the oppression of living in bubbles and how it had got to him. You might think that would engender some empathy with those whose whole lives have been lived in bubbles. They’re not exactly rhino reserves.

“It is so painful, as a South African of colour, to see how divided our national cricket side is,” writes Firdose Moonda, who has written thoughtfully and well about cricket in South Africa for decades. “We spent generations being told we were second-class, and here is a genuine opportunity to stand together, and we don’t. People with our skin matter.”

Perhaps she should have been a rhino.