It wasn't as clinical as her win in the Oakleigh Plate earlier this year, when she blistered away to an unassailable lead on a fast Caulfield deck, but it was a front-running ride that did the job nonetheless, her strength showing late to hold off Godolphin sprinter Trekking and McEwen Stakes winner Bella Vella.

The rain threatened to make life difficult for trainers John and Chris Meagher, however it held no fears for the brilliant mare who was steered into the best part of the track by Cox Plate-winning jockey Damian Lane, who landed his 21st career group 1. 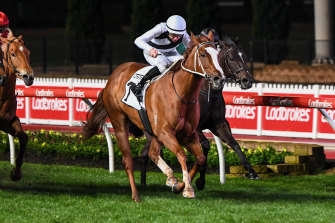 "I've just said it before, probably a touch arrogant, I don't care what I run her in [first up], I know she's going to run enormous," Meagher said post-race.

"We came here as confident as you can be going into a group 1. I've said all week, if someone wants to lead us they're going to have to break 10 [seconds].

"I'm just over the moon. To win a race of this calibre is just a huge honour and I'm rapt for everyone involved."

Meagher said he would weigh up where to head next with the daughter of Written Tycoon, who was purchased for just $60,000 as a yearling in 2017.

The Manikato Stakes and the Darley Classic, both over 1200 metres later in the spring, shape as likely options.

"This was our main target; we've pulled it off. It's just a huge relief to get through tonight and a huge honour," Meagher said.

Earlier in the night, Peter Moody's three-year-old Glenfiddich secured his spot in next month's Caulfield Guineas with a dominant win in the Stutt Stakes.

Bookmakers cut the Fastnet Rock colt's Guineas odds from $15 to $9 after the brilliant win, while he also shortened from $51 into $26 for the Cox Plate.

"He will go to the Guineas in good order," Moody said.

"We didn't have to run pre the Guineas but that gave him a look at the Valley in the hope that he could be back here in a month's time. We dream.

"Let's go to the Guineas. I think we have the right horse for that and we will go from there."

Winning jockey Luke Nolen said he was excited about what the colt could do in the Guineas.

"That was only his second run for Peter and he probably hasn't got him screwed right down yet, so he's got a very promising, bright future," he said.