Dinesh Chandimal rode his luck but carved out a fighting century for Sri Lanka in the second Test in Galle before a couple of late wickets from Australia helped set up an intriguing final two days of the series.

A fifth-wicket partnership of 133 runs between Chandimal (118 not out) and Kamindu Mendis (61) was the defining stand on a day which saw Sri Lanka restore credibility after their capitulation in a heavy first Test defeat.

Sri Lanka’s recovery mission, in reply to Australia’s 364, effectively began at 3-186 when Kusal Mendis was adjudged lbw to Nathan Lyon (2-160) for 85 and ended last night with fist bumps and a lead of 67 runs.

Seldom does a wicketkeeper miss three stumping chances in the same day.

Sri Lanka, who finished the day at 6-431, put themselves in a favourable position to level the two Test series by edging past Australia’s score in the 121st over of their first innings, for the loss of just four wickets. The hosts have accumulated more runs in their first innings than they managed in the entire first Test. 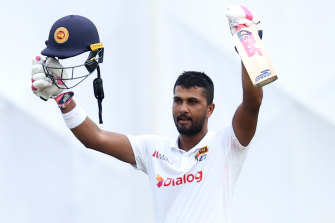 Dinesh Chandimal celebrates the Test century – his 13th – which has given Sri Lanka the upper hand in the second Test.Credit:Getty

Yesterday’s action could have played out differently, had Australia’s decision-making around their reviews been sharper.

One delivery after an unsuccessful lbw shout, Angelo Mathews was sent packing for 52 by Mitchell Starc thanks to a wonderful diving catch from Marnus Labuschagne at short leg. However, Australia regretted using their referrals so early. The visitors had none in the tank by the 80th over, while Sri Lanka still had seven wickets in hand.

With Chandimal on 30, and Sri Lanka ticking along nicely at 4-274, Starc got a delivery moving across the right-hander to rise off a length and catch the outside edge – or so the left-armer and the Australian slips cordon thought.

Chandimal was given not out and with Australia deprived of any further reviews, Sri Lanka’s No.5 survived. Replays confirmed Australia’s worst fears of a faint edge as Starc waved his floppy hat over his face in frustration.

Earlier, Chandimal survived an appeal for bat pad, leaving Australia out of reviews, before Mathews was hit in front – replays showed three red lights – but given not out.

Despite luck not going their way, Australia did not panic. Their two late wickets, which saw Sri Lanka go from 4-402 to 6-409 within 20 balls, was some consolation for a tough day in the dirt. The visitors will be acutely aware of how quickly the game is likely to move on days four and five, even if a draw is the most favoured outcome.

The biggest missed opportunity early on day three was Carey’s missed stumping with centurion-to-be Chandimal on 11.

Carey’s glovework has been excellent this series, particularly up to the stumps, but he knew he had blown a chance for a maiden Test stumping. The South Australian has snared 33 catches from 10 Tests, but is yet to record a stumping. 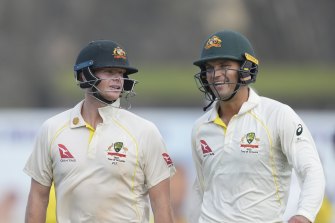 Australian wicketkeeper Alex Carey, right, had a day to forget behind the stumps in Galle.Credit:AP

Carey has made a concerted effort to stay lower for longer while up to the stumps but on this occasion, it was a case of too little too late as Lyon’s delivery turned and bounced sharply, beating the keeper’s left glove by a fair distance.

However, the 30-year-old also gave Kamindu a life up to the stumps, which was a bad miss, before fumbling another stumping opportunity down the leg side in the final 20 minutes of play.

As far as fruitless sessions go, the opening stanza on day three was right up there for the Australians. Sri Lanka made their way to 3-262 at lunch, adding 78 runs from 26 overs, for the loss of one wicket.

Not only did Pat Cummins’ men burn all their reviews, but for the first time in the series Sri Lanka nullified Australia’s slow bowlers with a clever plan, based on the principle of ‘when in doubt, sweep’.

It worked a treat as Chandimal raised his bat for Test century No.13 to propel his side into a positive position with two days remaining.