Mitchell Starc has brainstormed an ingenious idea for how to end the habit of non-strikers backing up too far without compelling bowlers to create potentially ugly scenes by running them out.

While Starc created headlines by warning England’s captain Jos Buttler for backing up too far in a Twenty20 game in Canberra, he revealed that warning batters had been an almost constant theme of his career. 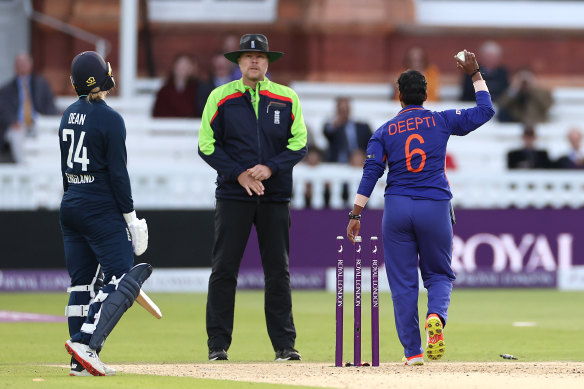 Charlie Dean after being run out by Deepti Sharma at Lord’s.Credit:Getty

As a consequence, Starc told The Age and The Sydney Morning Herald he had thought through a solution: use the fixed cameras monitoring no-balls to also check if a batter is leaving the crease before the bowler’s front foot lands. If they move too early, umpires can then call a short run.

“While it is hard to do at all levels, why not take it out of the hands of interpretation and make it black and white?” Starc said. “There are cameras for front foot no-balls, a camera there all the time [in international cricket] and someone watching the line.

“Every time the batter leaves the crease before the front foot lands, dock them a run. There’s no grey area then. And in T20 cricket where runs are so handy at the back end and games can be decided by, one, two, three runs all the time, if all of a sudden you get docked 20 runs because a batter’s leaving early, you’re going to stop doing it aren’t you?

“Then there’s no stigma. It’s taken away from the decision to have to run someone out or think about it. If it’s blatant, it is a different story, but I feel like that is at least completely black and white.”

Starc said he had to warn seven different New Zealand batters during a recent ODI series in north Queensland, with some backing up by up to two metres before he had bowled.

“I’ve warned batters plenty of times, [Buttler] is not the first occasion,” he said. “I warned probably seven Kiwi batters in those ODI games in the top end – some were two metres outside their crease.

“As I said to Jos, I could never see myself doing it, but it doesn’t mean that you should then feel free to leave your crease early.”

Asked whether he had allies in the Australian team about the concept, Starc joked that he would at least have the support of bowlers. He also noted the stigma of non-striker run-outs, despite law changes to make it more acceptable, was hard to shake.

Indian spin bowler Deepti Sharma’s runout of England batter Charlie Dean, to seal a victory for her team at Lord’s, has been a major talking point around the cricket world for more than three weeks.

Reactions in England were largely those of outrage, while in India, Deepti returned home to suggest that Dean had been warned multiple times before the climactic runout. Other international players, both women and men, have been divided about what they might have done.

“With what happened at Lord’s, with Deepti and Dean, there’s a lot of talk around it,” Starc said. “So the flavour of the month is the runout, what’s going on with it and the stigma around it and whether it’s right or wrong.

“I’m sure it’s probably going to pop its head up throughout the World Cup, no doubt. But whether anyone follows through and does it, I saw the captains say it wasn’t going to happen.

“It’s harder to do down the levels of cricket, but particularly in international cricket there are always going to be cameras square on for the front foot and for the run-outs. So, why not? And if it either makes the batters think about it, or stops it occurring, isn’t that a good thing?”

Ashes bubble 'would be my worst NIGHTMARE,' says Matthew Hoggard

Root ‘desperate’ to lead Ashes tour, but no decision made yet