The Melbourne Stars celebrated the inclusion of star West Indian Andre Russell in style, while leaving the Sydney Thunder ruing ill-discipline in the field in an intriguing Big Bash League clash at the MCG on Friday night.

In the final over bowled by leg-spinner Adam Zampa, the Thunder, with Alex Ross and Ben Cutting at the crease, needed 11 to win, and were left with six from two deliveries. Ross was grassed off the penultimate ball by Glenn Maxwell but Cutting could not deliver a match-winning six off the final delivery. 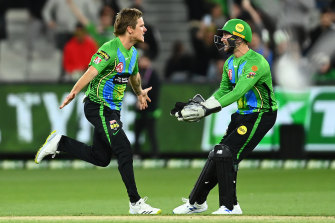 Adam Zampa celebrates after the Melbourne Stars’ win over the Sydney Thunder.Credit:Getty Images

In a battle between two teams expected to seriously challenge for the title, it was the rebooted Stars who opened their account, rebounding from a heavy loss to the Sydney Sixers. In response to the Stars’ 4-165, the Thunder were 5-161.

The Thunder had opened their campaign with victory over the Brisbane Heat but were left frustrated by costly no-balls and a dropped catch.

Russell, who flew into town this week after playing in the Abu Dhabi T10 title, was required to follow strict protocols, allowing Cricket Australia to sign-off on his availability. This included entering the venue through a different gate to his new teammates, using a different lift and not going near his teammates when on the field.

Complete with his “Mr T” mo-hawk, Russell (17 off 9) provided a late cameo with the bat, and finished with 0-40. He will remain isolated from his teammates until Monday. 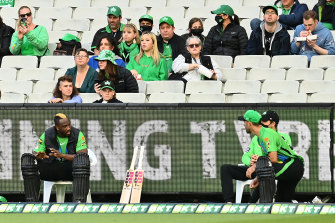 Glenn Maxwell talks to Andre Russell, who is seated away from the team due to COVID restrictions after his arrival in Australia.Credit:Getty Images

Englishman Sam Billings (43 off 31) and Matthew Gilkes (56 off 49) shared in an 89-run stand and had the Thunder well-placed but that changed when Billings mistimed a drive off Afghanistan leg-spinner Qais Ahmad (who will also be in isolation until Monday) and was caught at long off.

Earlier, Nick Larkin (52 off 43) and Hilton Cartwright (42 off 30) shared in an 80-run stand for the Stars which turned the contest, coming after teenage leg-spinner Tanveer Sangha (2-29) had claimed the key wicket of Glenn Maxwell (16 off 16). The Stars skipper botched a reverse sweep and was bowled. He grabbed at his hamstring while fielding in the deep in the penultimate over of the night and will be monitored.

Larkin, caught twice off no-balls, including a reprieve on 47, hit five boundaries. Cartwright muscled two sixes before he was snapped up in the deep.

What a catch – well, sort of

We saw Jake Fraser-McGurk’s spectacular one-handed catch at Marvel Stadium this week, and the Thunder’s Daniel Sams thought he had taken a “mark” to rival this when Larkin swiped a full toss to deep backward square leg. However, the catch was in vain, for paceman Nathan McAndrew had dished up a waist-high full toss – a no ball – in the first over of the power surge.

It was a case of calamity corner when Marcus Stoinis (13 off 13) was run out in a mix up with Glenn Maxwell, just as Stoinis was in a menacing mood. Having missed the Sixers’ clash, Stoinis was determined to have an impact at the top of the order, and had crunched two boundaries – including a cross-bat drive down the ground off Daniel Sams – when he fell. Stoinis pushed to gully and quickly realised a single was not on. However, Maxwell was already at his end by this point, leaving Stoinis no choice other than to set off and hope for the best. It was a failed mission, for Chris Green’s throw was too good. “I am putting my hand up,” Stoinis said when asked who was to blame.

Will Pucovski, again sidelined because of concussion, joined the Seven commentary team on Friday night. Pucovski hasn’t played since a training incident in the nets at Victorian training in October – the 10th concussion of his short career. The batting prodigy, who made his Test debut against India last summer, said he was due to return to the field for Melbourne Cricket Club in a Premier grade match against Kingston Hawthorn on January 8.

“I am going really well. I am nearly back at 100 per cent so am back pretty much in full training and back in action after Christmas, which I am really excited about,” he said.

Dan set to be the man for the Heat