Home » Stepping back in the ring: bookies’ return a huge boost for Warrnambool

The push to get professional punters back on-course and betting in the bookies’ ring will reach a “watershed” moment next month when Victoria’s hallmark country racing carnival at Warrnambool hosts up to 90 per cent of its normal bookmaker levels.

The three-day carnival in the first week of May, featuring the time-honoured Grand Annual Steeplechase among 23 flat races and seven jumps races, will see at least 30 on-course bookmakers spread around the track in what will be the closest taste of normality post-COVID 19. 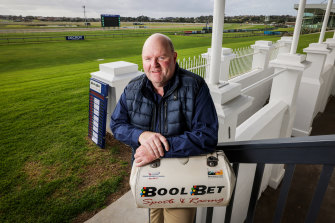 Mark Attrill will be one of more than two dozen bookies welcomed back to Warrnambool.Credit:Nicole Cleary

While crowds at Warrnambool, capped at 12,000 per day, will be split into two zones, Victorian Bookmakers’ Association co-chairman Lyndon Hsu said the return of bookies on course will mark an important step forward for his members.

The main betting ring at the ’Bool will operate at just 66 per cent capacity due to COVID distancing requirements, but there will be enough space around the course to host up at least 30 bookies on each of the three days.

“If we could get every bookmaker that wants to work who is usually allocated a position, and if they are all working, however that might be, then it really is a victory in that sense,” he said.

“We’re very encouraged and if what is planned is pulled off, it’s a defining moment in our little world of bookmaking and it would catch up and be more consistent with what’s happening in NSW and Queensland, and South Australia and Western Australia.”

The next step, Hsu says, is getting professional punters back on course.

“What I’m hoping is, even if the ring is a dozen bookmakers and they’re some of the stronger ones – with telephone flows and on-line flows incorporated into their on-course presence – I think the professional punters will be encouraged to return with their cash and bet on credit face-to-face,” he said.

“That’s the next step, because we want to see those people come back because they clearly drive a lot of volume. It takes a lot of $5 punters to make up a bet when someone wants to have a $2000 or $3000 bet. It’s very key to get those people back, and in order to do that we need sufficient ring strength with experienced and qualified bookmakers to handle that sort of money.”

Local bookmaker Mark Attrill, who described the three racedays as Warrnambool’s spring carnival equivalent, said the week would provide the region with a much-needed boost. 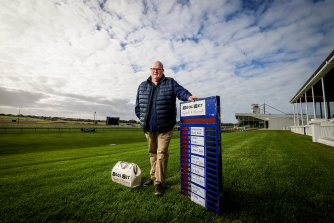 “It’ll be a big week for the whole town,” he said.

“You’ve got no idea how many businesses rely on it, from here to Terang, Camperdown, Mortlake, Port Fairy, the whole district.”

According to Hsu, just over a dozen of the VBA’s 161 members have been able to forge successful online businesses. Another dozen or so have remained active via telephone betting.

But Attrill, like most, was left out of business during COVID-19. Since the gates have opened he has been able to attend some of the smaller meetings in the western district.

“[At the] Stawell Cup, [in the] main betting ring, there were six in the betting ring, one in the marquee and one on the front lawn,” he said.

“But there was reasonable money there at the track; it was back to the years gone by. It seemed to me to be a lot more young people there, usually you get $5 each way, but there were young blokes having $50 each way and $100 the win.

“Camperdown Cup was OK as well, but a lot of those meetings have been OK because they’ve cut the number of bookmakers that have been working because of COVID.”

But while Warrnambool will be a buzz, there is still a large majority of part-time and hobby bookmakers who haven’t been able to get on track.

Smaller clubs, such as Wangaratta or Moe who have race days this weekend, lack the resources to welcome back large crowds in a COVID-safe manner, making it un-viable for local bookies to work at those meetings. Warrnambool will provide a great trial run to take that next step, according to Hsu.

“Of that 135 membership [who don’t have internet or phone betting], we’ve probably had 50 that have been able to work frequently, if not consistently, but we need to get the other 80-odd bookmakers who work occasionally or only work at some of the smaller tracks, we need to get them back,” he said.