England may have displayed more attacking intent in what became a compelling first Test than for much of the last troubled 18 months but clearly we have not seen anything yet.

Ben Stokes wants that welcome, thrilling victory at Lord’s to be just the start of what looks like being a white knuckle ride back towards the top of the Test world.

The new England captain was positivity personified at Trent Bridge on Thursday as he urged his team to go even harder at New Zealand in pursuit of a second Test win that would give them their first series victory in 18 months. 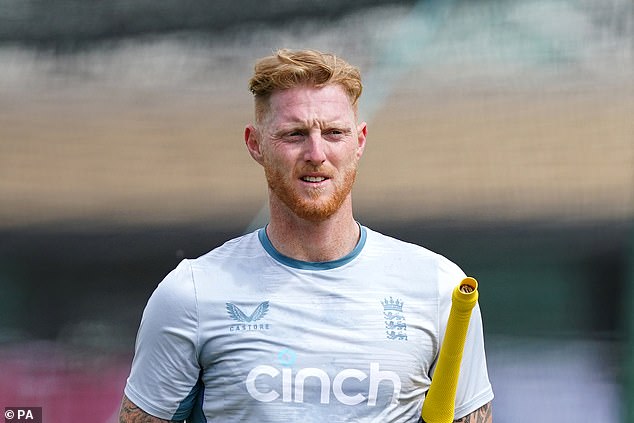 Ben Stokes wants that welcome, thrilling victory at Lord’s to be just the start for England 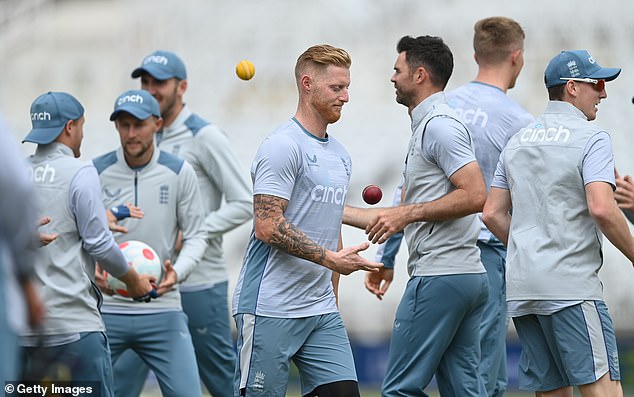 There was a nod, too, to the success of Eoin Morgan’s reign as England white-ball captain as Stokes promised to back his team through the highs and near inevitable lows of this intriguing journey as long as they play the way he and Brendon McCullum demand.

‘The message from me to everyone is to look to be even more positive than we were last week,’ said Stokes ahead of Friday’s second Test. ‘Let’s just always try to be better.

‘And something I’ve learned from Morgs is that he’s always looking to be positive in defeat or victory. I don’t know how you make positive more positive but I think you know what I mean!’

It is an enticing, high-octane prospect, but it is one fraught with danger, too. There is a fine line, for instance, between positivity and the seemingly reckless way Jonny Bairstow played in both innings after going into Lord’s straight from the IPL. 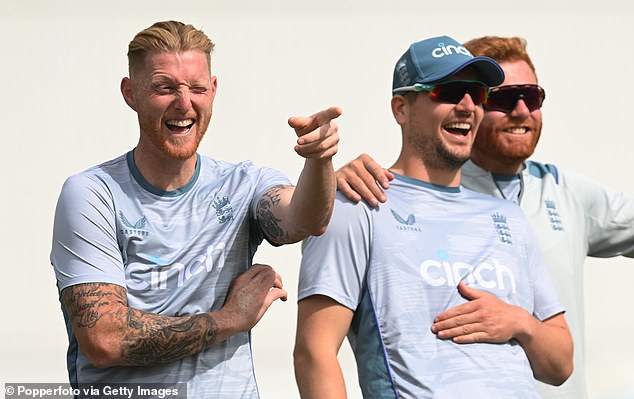 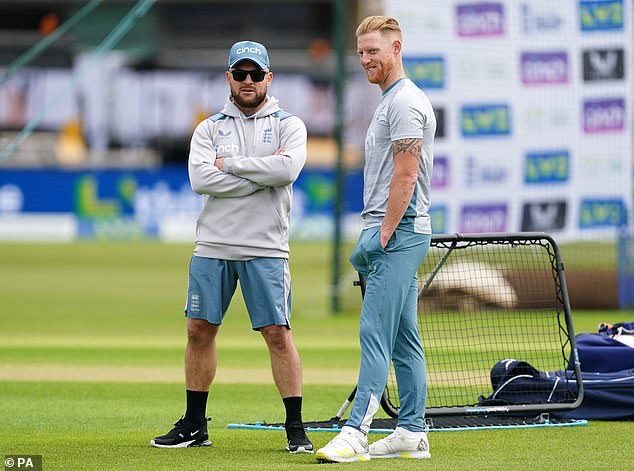 And the first Test under new management would have been a very different story had Stokes himself been dismissed for one in the second innings charging Colin de Grandhomme rather than being reprieved by a no ball.

Stokes clearly believes fortune will favour the brave. ‘That 10 or 15 minutes Jonny spent out there in the second innings put New Zealand on the back foot,’ he said. ‘He only scored 16 but if we’d got another half an hour or 40 minutes of that from him the game would have been taken away from them.’

It was a tone set even in adversity when Jack Leach, who is fit again after passing concussion tests and was named in an ‘unchanged’ team on Thursday ahead of his substitute Matt Parkinson, hurt himself furiously chasing a ball to the boundary on the first morning.

‘Baz kindly made a big point about Jack doing that in the dressing room at the end of day one,’ said Stokes. ‘I think that filtered through the team all week, just the way everyone was flying around the field and committing to stopping every single run possible.’ 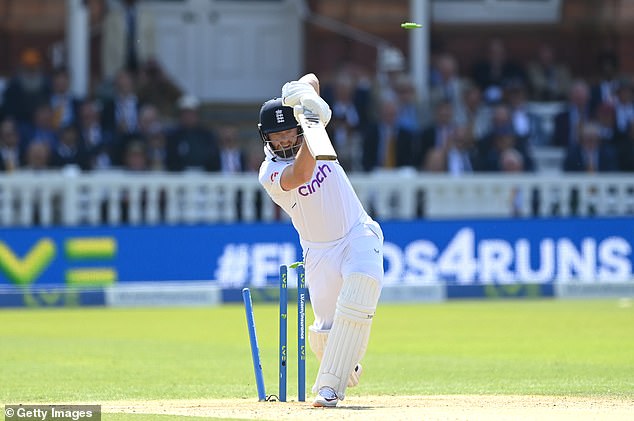 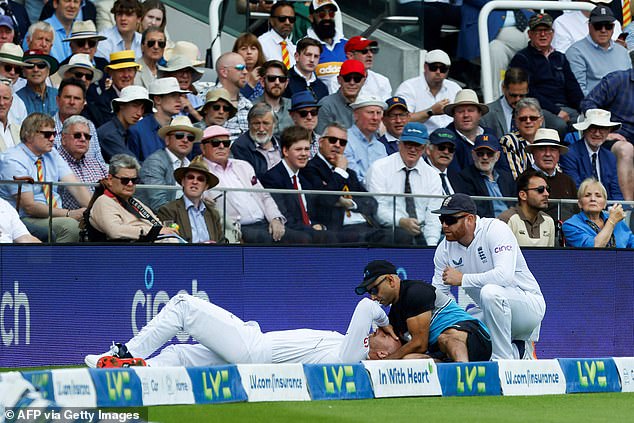 The new mood has been evident in the build-up to this Test, with McCullum endeavouring to bring smiles aplenty to practice. There was the bizarre sight on Wednesday of England’s coaching staff donning helmets and then heading tennis balls for players to catch in the name of team bonding while Thursday brought a football penalty shoot-out with keeping coach James Foster excelling in goal far more than his opposite number McCullum. ‘I told him I could see why he gave up the gloves,’ smiled Stokes.

‘Everyone just seems to be enjoying every single moment, whether it’s in training or out on the field,’ he added. ‘I think everyone should be looking to enjoy representing England first and foremost and then the results will look after themselves.’

The serious point now is that England are looking for their first win at a ground which has been considered as something of a fortress for them since that heady victory over Australia in 2015.

Then, just as it was at Lord’s, Stuart Broad, with one of the great bowling spells, and Joe Root, with a high-class century, were central to England’s triumph. 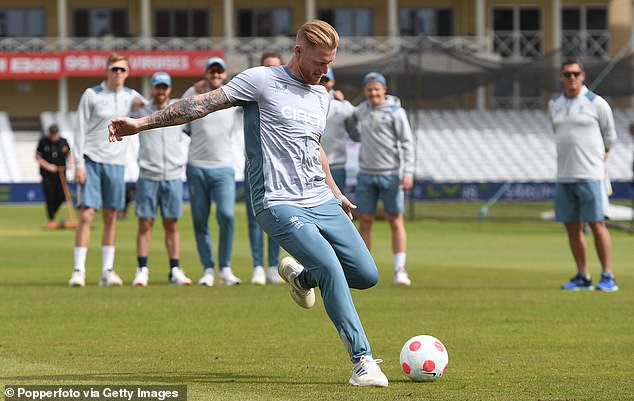 That team ‘hat-trick’ on day three last week orchestrated by Broad was hardly on a par with his eight for 15 here seven years ago.

But his return along with Jimmy Anderson was a successful one for England and Stokes hopes for something special from Broad again in what could be, with no Ashes match at Trent Bridge next year, his last home Test.

‘Broady did say he just felt something in that over at Lord’s and over his career he has gone on those mad runs,’ said Stokes. ‘He’s had amazing spells and that’s just another to add to his collection. We were saying if he does that here that would be Trent Bridge rocking for about 45 minutes. But Lord’s soon calmed down again unfortunately.’ 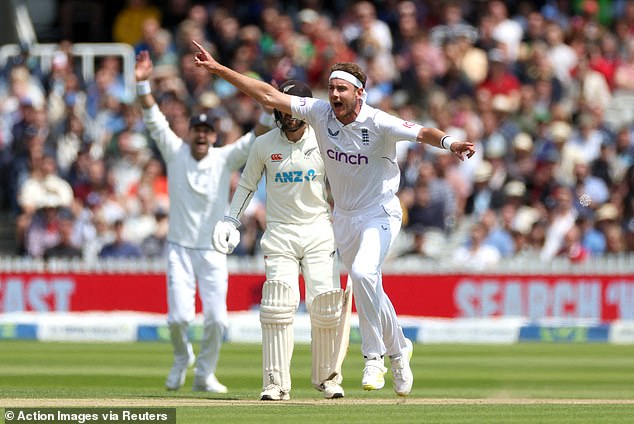 But the undoubted star of the first Test was Root in his first Test after standing down as captain and producing one of the greatest of his 26 centuries before talking of how leadership had consumed him and affected his health.

‘I went through the whole ride with Joe,’ said Stokes. ‘The England captaincy is about more than what you do on the field and we had some private conversations about all that stuff.

‘Now, without the added pressure of being captain, it’s like he’s 18 again and I’m pretty sure it won’t be long before he’s snipping people’s socks again. It’s great to see how he is and the one thing he’s always done is score runs.’ And if Root scores runs again this week then the white knuckle ride will take another upward turn. 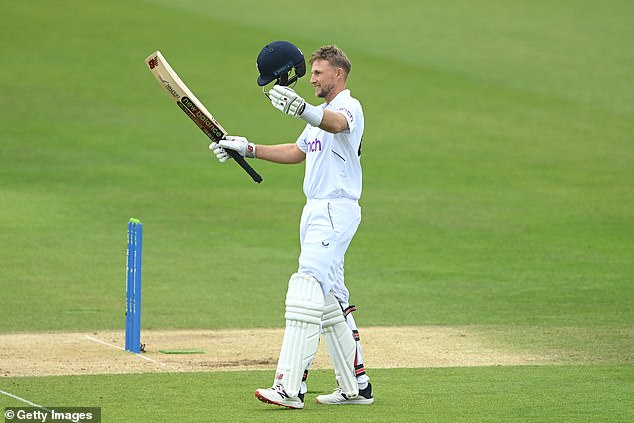