Star Afghanistan spinner Rashid Khan says Matt Short deserves to be called an all-rounder, and he hopes his Adelaide Strikers teammate will soon play for Australia.

Short has been a revelation for the Strikers over the past two BBL seasons, and the opener currently leads the competition in runs scored this campaign. 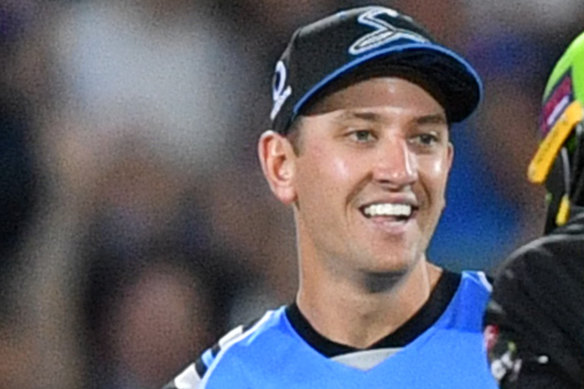 Matt Short of the Adelaide Strikers.Credit:AAP

Importantly, the 27-year-old has also become a weapon with the ball, with the Strikers often using Short to open the bowling with his off-spin.

The tactic worked a treat in Monday’s three-wicket loss to the Perth Scorchers, with Short bowling star South African Faf du Plessis with the fourth ball of the innings before returning to snare the scalp of Aaron Hardie.

Short finished with 2-11 from his two overs but the Scorchers recovered from 6-72 to snare victory with five balls to spare.

Khan is one of the best spinners in the world, and he has been impressed by Short’s efforts with the ball over the past two years.

“I don’t know if he calls himself or not, but we should call him an all-rounder,” Khan said post-match.

“I think he’s a proper off-spinner. He has all the skills.

“It used to be me coming in the Power Play bowling, and now he’s come in and taking that responsibility.

“It makes my job a little bit easier in the middle to come and keep things tidy.”

Khan said Short had all the tools needed to thrive on the international stage.

“In the game before, we spoke about how good it would be to see him playing for Australia,” Khan said.

“It would be his dream playing for the country, and I think he deserves it.

“His consistency with the bat, with the ball, and he’s an excellent fielder – I would be so happy for him to see him play for Australia. I hope in the future he gets that opportunity.”

The Strikers posted just 7-133 against the Scorchers, but they were on track for a remarkable victory until Ashton Turner (48no off 38 balls) got his team over the line.

Adelaide will be back in action on Saturday when they host the Melbourne Stars.

The Morning Edition newsletter is our guide to the day’s most important and interesting stories, analysis and insights. Sign up here.

England step up covid restrictions ahead of Sri Lanka tour