The Melbourne Stars refuse to panic despite three consecutive losses, with all-rounder Marcus Stoinis aiming for a turnaround starting in Monday's clash with Hobart Hurricanes.

The Stars lost to the Hurricanes by 21 runs on Saturday night and fell out of the top four, but Stoinis said his side remained calm and together, and have nine more round games, plus finals, to move back up the standings.

"It's not panic stations or anything like that but we would have loved to have a win," Stoinis said. 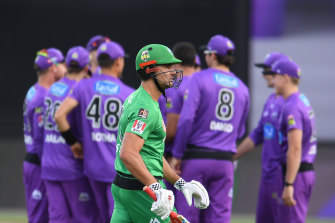 Marcus Stoinis, centre, leaves the field after being dismissed.Credit:Steve Bell

"Calm and clear is the way you have to be in these tournaments. You get on a roll, ideally, you do that from this stage of the tournament until the end. Hopefully we have timed that well."

The Stars need more support for skipper Glenn Maxwell, who continued his stellar Big Bash with 70 runs in Saturday's loss. Stoinis said his side left too many runs on the "beautiful" Blundstone Arena surface due to losing wickets.

"We need to go a bit deeper and a couple of us in the top order need to help out Maxy and Nicky P [Pooran] more as well," Stoinis said.

"When we have those two batting well, it only takes one or two others to put their hand up and then we would have cleaned that game up.

"… There could be another 13 games for the season. There is more than enough games."

The Hurricanes look one of the contenders for this season's title and their deep batting line-up will again cause problems for the Stars on Monday. Stoinis is yet to be cleared to bowl in games.

"The bowling is almost ready to go," Stoinis said.

"I'm fit now. I just need to roll my arm over in the nets a few times before they give me a chance to unleash in a game."