Home » Sports News » STUART BROAD: I was too tentative in first Test against South Africa

STUART BROAD: I was too tentative in the first Test, but it won’t happen in next showdown against South Africa

The mentality with which this England Test team is looking to approach the game means there are going to be wonderful thrills and a few spills along the way. This past week against South Africa saw the spills.

Obviously, we had an amazing start to our summer, winning all four Tests against New Zealand and India, but we must remember that we were in positions where we could have lost each of them.

We managed to come out on the winning side by playing in such a positive manner and with such a positive mentality. That didn’t happen against the South Africans last week and I suppose our group would question whether we were positive enough.

As a team, we began this summer ’s journey on the front foot. If we were in doubt, we would always take an aggressive option, whereas at Lord’s, it felt we didn’t quite commit to that policy. 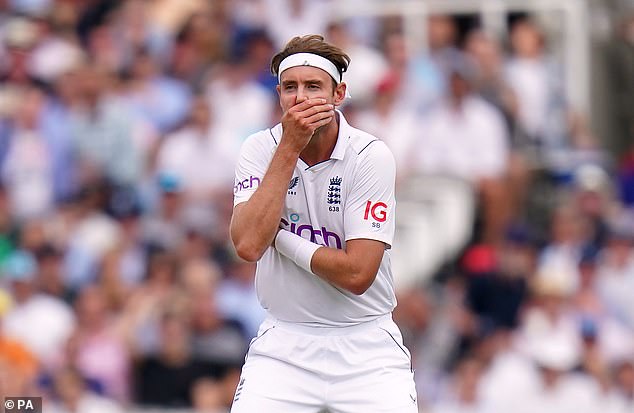 Yes, I’m sure all those with an interest in Test cricket would acknowledge that it It was a fantastic toss to win. considering the Lord’s pitch, with a bit of moisture, a decent grass covering, cloud overhead and the humidity.Jimmy and I both kicked the turf when Dean Elgar called correctly.

You could argue they were perfect bowling conditions on Wednesday, and South Africa possess a really strong international attack. They made good use of their opportunity.

In truth, we could have been 80 all out, had things gone a bit more their way and so we actually saw a score of 165 as a bit of a positive in those conditions. 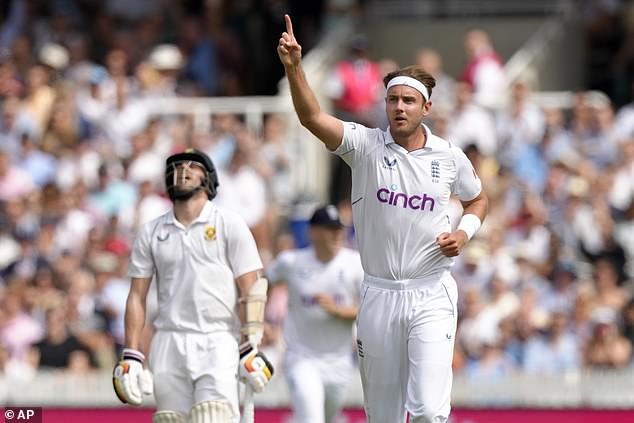 Typically of Lord’s, conditions then changed, the sun came out on day two and the ball didn’t do quite as much when it was our turn to bowl.

We looked to take wickets all the way through the day and that is something that we are committed to — we are not so bothered about run-rate, we just want to try to strike whenever we can and move the game forward. Ben Stokes epitomised that with a fantastic spell of creating chances.

Personally, maybe I was a bit tentative, questioning my rhythm and how my action was, instead of focusing on being really competitive. Perhaps I didn’t have that attitude of ‘I’m coming for you, batter,’ that people associate with me.

Perhaps I erred on the side of caution because I wasn’t going into the Test match-hardened. We had not played for six weeks and you only have to be slightly off in your competitive spirit for it to show at international level.

So what am I going to do when I get to Old Trafford? I’m going to be ultra-competitive. I’ve had my spell now, bowled 20 overs in a game, had a bat, took a catch. Now I’m coming to hit the arena hard. 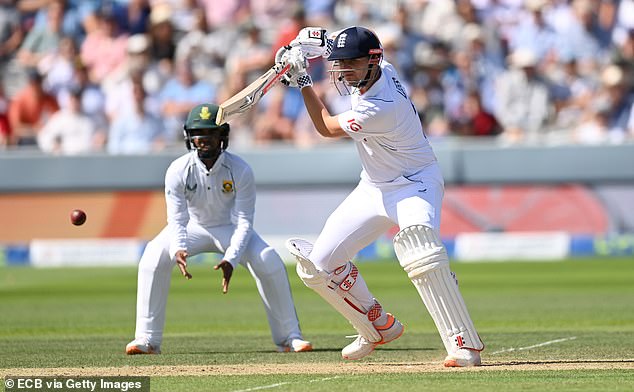 South Africa are tough opponents. In every series I’ve played against them, they’ve been hugely competitive. There have been a few verbals, a bit of argy-bargy, and that is the great spirit of Test match cricket.

What differentiates it from any other format is how competitive, how driven and how emotional it is. You don’t see that competitiveness in Twenty20 and Hundred matches as much because the length of games doesn’t really allow it. The battles don’t strike as hot.

And any time an opposing team come to play at Lord’s, there is always an added incentive. It’s always very motivating for touring teams to play there and South Africa played really good Test match cricket in conditions that favoured them.

They will know they won a pretty crucial toss but batted with grit and bowled wicket-taking deliveries throughout their spells.

They have a lot of belief in their own ability, their own strengths and what they’re about. They’re a really competitive side and

The match was a good learning experience for us. It showed us that as a team, we must be fully committed at Old Trafford to what we are trying to achieve, as we certainly showed against India and New Zealand.

Taking the positives from defeat is the worst saying in sport, something that turns you off as a fan, I think,but from a players’ point of view what we must take from our first defeat of the summer is that if we are committing to this enjoyable style of play, we have to be 100 per cent in. If you just poke around, it doesn’t work. 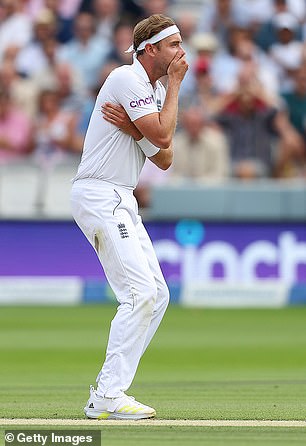 Broad has insisted he was too tentative in the first test

Where I have taken that on board is in my batting. I am sure you are familiar with my ‘Night Hawk’ role, this team’s alter ego of the nightwatchman. Well, I’m also the morning hawk if I bat before lunch.

Freedom was given to me in the most extreme way at Trent Bridge when Joe Root and Ollie Pope were on their way to scoring fantastic hundreds, as Brendon McCullum came to me and told me to get my pads on.

We were only a couple of wickets down but he said he wanted me to go out and change the atmosphere. My home crowd had gone a bit quiet and he asked me to go out, try to hit my first ball for four, and give them a cheer. If I got out after that, he said, he wouldn’t care.

It fits with our remit to change the game in a short time. My strength is trying to hit boundaries and knocking bowlers off their length.

When Stokes and I put on a 50 partnership in the second innings, it wasn’t overly glamorous, there weren’t many coming out of the middle of the bat, but it was a show of intent. on how we were going to try to play the game.

Last week, I scored 15 and 35 butAt some stage, I feel that my batting’s going to pay off with a 60 or 70, and that is the sort of contribution that can change a game.

That is the thinking of a team who are moving in a different direction. I played in a world-class XI with a top seven of Andrew Strauss, Alastair Cook, Jonathan Trott, Ian Bell, Kevin Pietersen, Paul Collingwood and Matt Prior, and every one of them averaged more than 40. 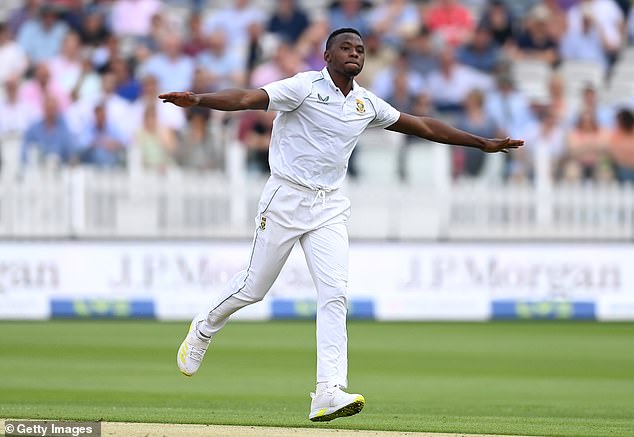 We are trying to flip that style now. and it doesn’t matter if you average 30, as long as you have an impact with an amazing 80 at some stage. It’s that impact, less often but more striking, that can win you Test matches.

As bowlers, it’s about wickets, and as players, we must continuously ask ourselves, ‘Can I make this my day to be the game changer?’ 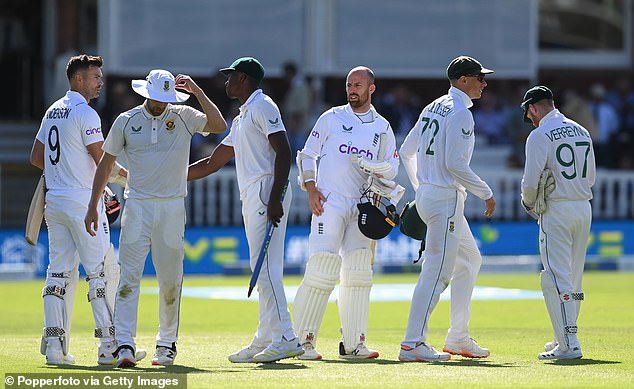 England were. easily beaten by South Africa as they lost by an innings and 12 runs at Lord’s

When I batted in the second innings at Lord’s, we were 75 runs behind and I knew we needed another 220 to be competitive. That meant Stokes and I needed a 150 partnership at pace. We couldn’t get up to those numbers but that was our mindset.

And it has to be with regards to every aspect of our cricket this week. We have won 12 and lost just one of our previous 15 Test matches at Old Trafford. We like playing there, the crowd really gets behind us and we will be ready, hunting and prepared for an entertaining week.