Boom three-year-old colt Anders is out of Friday night's group 1 Moir Stakes at Moonee Valley after coming down with a temperature.

The speedy sprinter was expected to start favourite in the $1 million race under lights after his blistering win in the San Domenico Stakes in Sydney late last month, but Ciaron Maher Racing revealed on Sunday night that there would be a change of plan. 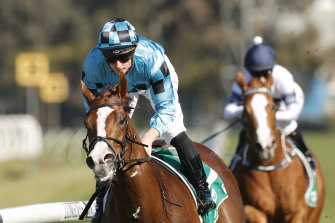 Anders is out of the Moir Stakes after coming down with a temperature over the weekend.Credit:Getty

"It is with great disappointment to announce Anders has had a temperature over the weekend, which has been monitored closely," a statement read.

"Although not of serious nature, it is enough to miss his gallop at Moonee Valley [on Monday] and in turn the Moir Stakes next Friday."

The three-year-old colts have been the stars of the spring, including Anders, who Widden Stud purchased into last week as a future stallion prospect. Craig Williams, the reigning Melbourne Cup-winning jockey and winner of Saturday's Rupert Clarke Stakes on Behemoth, had been booked to ride Anders in the Moir.

The son of Not A Single Doubt remains an option for The Everest, with just six spots left up for grabs, however the Coolmore Stud Stakes over 1200 metres against his own age group on Derby Day remains the No.1 goal for Widden Stud and his connections.

"This [news] is extremely disappointing for his existing owners including Aquis and Widden Stud, as we felt the Moir was the race to prove his group 1 ability to the racing public," Ciaron Maher Racing said.

"However, we are confident of him doing that in future targets during spring, with The Everest and Coolmore ahead.

"With it only being a minor setback, we will now focus on getting him right for those races."

Aquis interestingly last week revealed that fellow three-year-old colt Farnan, the reigning Golden Slipper winner, would take up their slot in The Everest and not Anders, in whom they own a share.

Of the six slots left, Godolphin is expected to be represented by Bivouac, leaving five spots for Coolmore, Chris Waller, The Star, James Harron and Max Whitby to fill.

However, Widden Stud's owner Antony Thompson told The Age connections would not rush to take up an Everest offer.

"We've got options. We'll wait and see how the horse is when he's right and weigh up all the options then," he said.

"We weren't going to make a decision until after the Moir and now we'll wait until the horse is right.

"At this stage it looks very minor; his temperature is just very slightly elevated and if it wasn't such a valuable colt you might press on, but with a horse like him and so much in front of him we'll always err on the side of caution."

Joe Root steps down as England Test captain: 'I know the timing is right'