Home » Sports News » That’s a good leave: Stars give up part of break to help cricket

Australia's leading cricketers have agreed to take on media commitments during their annual leave period in a bid to keep cricket's flame flickering during the coronavirus shutdown and help sponsors who have been dramatically affected by the pandemic.

Under the terms of the memorandum of understanding signed in 2017 between Cricket Australia and the Australian Cricketers' Association, centrally and state-contracted players are entitled to six weeks of annual leave, in which time a player is not required to "train for, or play, cricket for CA or the player's state association, participate in any CA/state association mandated educational, media or team building activities (unless otherwise agreed by the player in writing)." 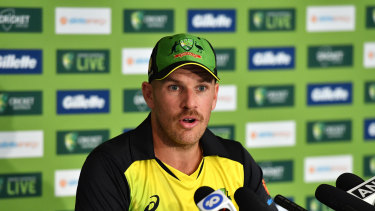 With Australia's home season having concluded prematurely last month because of the virus, players are currently on their annual leave period. The men's national team are not scheduled to play again until July's white-ball tour of England after the Test tour of Bangladesh was last week postponed.

The upshot is that like most Australians during the pandemic, the country's top cricketers are spending their days at home. Even their personal plans have been affected, with Australia's frontline leg-spinner Adam Zampa recently delaying his wedding because of restrictions placed on mass gatherings.

CA have in recent weeks approached the ACA about the possibility of players undertaking media commitments where they otherwise wouldn't during their leave period.

Sources have confirmed that Australia's men's team leaders have warmly received the idea, keen to help out as much as they can.

The country's greatest ever Test off-spinner Nathan Lyon is set to face the media on Tuesday via a Zoom press conference as part of the scheme, which remains an opt-in concept, meaning players seeking to avoid any media commitments during their leave don't have to take part.

The aims of the arrangement are several-fold. Among its goals are to help keep cricket in the limelight when there is barely any live sport being played around the world, and to support CA's major sponsors including Qantas who last month stood down two-thirds of its workforce amid the backdrop of a global air travel standstill.

CA's work with the ACA in this area is also consistent with the players' mantra of being partners in the game, a philosophy pushed hard during the 2017 MOU negotiations during which CA fought unsuccessfully to have the longstanding revenue sharing model shelved.

CA has deferred its national contracting period – initially due to occur earlier in April – in a bid to gain greater clarity around the virus and its impact on cricket, which has placed several series later this year – including the men's Twenty20 World Cup in Australia – in doubt.

CA is already bracing for a 50 per cent drop in revenue over the next 12 months, with next summer's lucrative marquee home men's Test series against India up in the air because of the virus.

Several of Australia's leading players had been due to play in the Indian Premier League, scheduled to begin on Wednesday after the initial start date of March 29 was pushed back because of the pandemic. However, a lock down in India and overseas travel bans, both in India and Australia, have made the prospect of Aussies taking part in such an event in the coming weeks fanciful. Board of Control for Cricket in India chief Sourav Ganguly flagged a further delay to the Twenty20 tournament via The New Indian Express.

Australia vs England – Ashes: Live score from Day One of the 5th Test