English cricket has been subject to a ‘£400m private equity approach’ for a controlling interest in its Hundred competition.

Bridgepoint Group, a London-listed buyout firm, made the ground-breaking offer over recent weeks, according to Sky News.

The proposed transaction would see Bridgepoint acquire a 75% stake in the two-season-old tournament and thus provide the England and Wales Cricket Board with an injection of cash.

It comes at a time when private investment in the sport is increasing around the globe – two new Twenty20 tournaments will launch in the new year in the United Arab Emirates and South Africa, with significant money in both emanating from franchise owners in the lucrative Indian Premier League.

While such a deal would see new funds injected into the sport, and give the 18 first-class counties a huge financial shot in the arm, it would also result in the ECB relinquishing control of its vehicle for future funding of cricket in this country.

The 100-ball-a-side game – not played anywhere else in the world – has divided opinion in the sport, drawing criticism for its domination of August, the prime month of home seasons, and therefore messing with the scheduling of both Test and County Championship matches.

But it has undoubtedly lifted the profile of the women’s game in this country, been the centrepiece of massively increased broadcast revenue and provided the ECB with a new family audience, according to research. 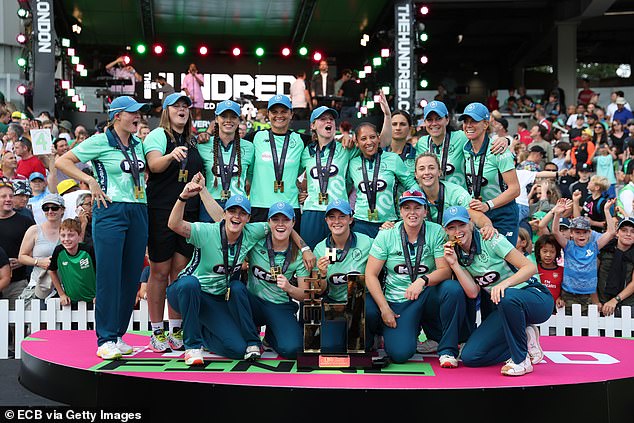 When plans for the competition were first announced, it was anticipated that it would remain the property of the ECB and its county clubs.

However, cricket’s landscape has changed dramatically over the past four years and upon coming into office Richard Thompson, the governing body’s new chair, refused to play down the possibility that the eight Hundred teams could be sold to private investors, saying he has a ‘preference for maximising value’, adding ‘you’ve got to make a decision on when’s the right time.’

The ECB declined to comment yesterday on what is a much more substantial offer.