Perhaps Pat Cummins swore, off camera of course. Or maybe a shoelace came undone. There must have been something. Otherwise, his first day as Australian captain was almost too impossibly perfect to compute.

Let’s count the ways. Even before the anthems, England pinned up a team sheet without Jimmy Anderson or Stuart Broad. They had their reasons, however obtuse, but it felt like a gift. Cummins was sure at least one of them would play in each Test. 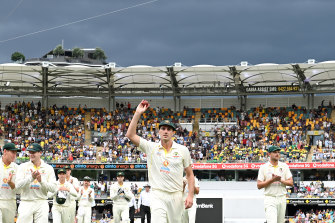 At the toss, there was another gift. At the Gabba, no toss decision feels right. Cummins would have batted if he won it, but Joe Root did instead. His decision to bat was not necessarily wrong, but Cummins and Australia by their excellence invalidated it. It is now certain that three of the five Tests in this series will be played in helpful bowling conditions. Where will England get their runs?

Cummins drew the best out of the oft-maligned Mitch Starc. The first ball of the series was a Starc leg-stump half-volley that Rory Burns somehow played around. Under previous captains, these balls went for fours. Was this a plan? “I’d like to say so,” said Cummins. Incidentally, you could write a book about the Gabba and first balls of series. Gideon Haigh probably has.

Later, Starc’s slant and lift dealt with Jos Buttler, who was hitting the ball as sweet as a butternut. Josh Hazlewood bowled the perfectly pitched ball to Root, seaming away from a full length. Along the way, he collected Dawid Malan. Cummins himself dislodged Ben Stokes with one that lifted and left him. It was the first of five for him.

There was at last a maiden wicket for Cameron Green. In four Tests last summer, it always threatened but did not materialise. On the first day of Cummins’ watch, here it was. There wasn’t yet a long overdue 400th wicket for Nathan Lyon. That’s on Cummins’ second innings agenda. 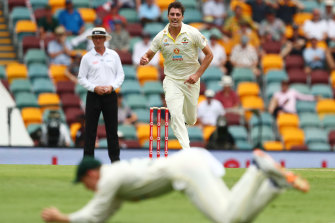 Australia took all their catches. Wicketkeeper Alex Carey’s three on debut came swaddled and beribboned. Hazlewood’s two on the run at fine leg barely got to him at all, yet he lunged and clutched both. He is a redoubtable cricketer.

Captaincy is not supposed to be an armchair ride. Mark Taylor made a duck on day one, the first of a pair. Allan Border, Steve Waugh, Ricky Ponting, Michael Clarke, Steve Smith and Tim Paine all either failed with the bat or spent the day chasing leather.

Except for the six years that he was injury-cursed, Cummins is touched. In his first Test, he took three day one wickets, hit the winning runs and was man-of-the-match. He should make a debut every week. 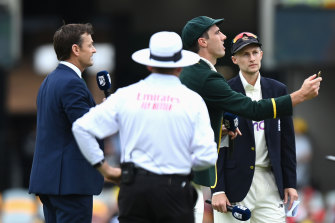 How about lucky and smart? It wasn’t all serendipitous accident. The Australian seamers profited from aiming carefully and bowling full. Perhaps they remembered pounding it in too short here last summer against India, who ran down 328 to win. They ought to remember it; it was their last day of Test cricket before this. A tired Cummins was one of the culprits then. He’s a fast learner.

Only once did the Australian seamers back off, when Buttler began to release their siege by lifting length balls repeatedly over extra cover as only he can. Cummins put a man in the deep. It was a strategic backward step, not a retreat. Buttler slowed, then fell. Immediately, Australia returned to the offensive.

It worked for Cummins that day one began in the field. For a bowling captain, this was the deep end. To judge from the assuredness of his body language, Cummins when bowling was able to hold two thoughts at once, about the next ball and the next over and who should bowl it. That is, he could bowl and chew gum. We should have known. Look at the scorecard: the load could not have been more evenly distributed if it was weighed on a set of scales.

Smith buzzed around in his new role of adjutant, but there wasn’t much for him to do. Napoleon’s offsider probably felt the same way.

Cummins made 11 bowling changes in 50 overs, often tailoring bowler to batsman. Some worked like self-fulfilling prophecies. He took the ball himself when resuming after lunch and immediately had Haseed Hameed held at slip. When he reintroduced Green, Ollie Pope hooked his first ball to Hazlewood. Napoleon? Now he was Midas. Even his timing was spot-on. Immediately after he took his fifth wicket and England’s last, the infamous Gabba storm clouds burst.

Back to those generals. This was the battle, not the war. There is much cricket to come in this series, all in a likely rush. It won’t all be this one-sided. It might not be on Thursday, when Australia resume on a sweaty pitch. Hameed, Pope and especially Buttler showed that they will have more replete days. Root and Stokes already have, and will again.

Both teams are underdone, so it probably worked to the advantage of the Australians to be in the field, shaking out the effects of hibernation together, rather than fidgeting in the dressing room.

But this day was all about the investiture of captain Pat. He performed most of the rites himself. He narrated Fox’s pre-play scene-setter. He lucked in at the toss. He took half the wickets and schemed the other half. He’s the No.1 bowler in the world and he proved it. He did the media rounds, the smile never leaving his face. He said that at the toss, he’d been lost about process: who did he hand the team sheet to, for instance? But if he put another foot wrong, no one saw it.

He’s Mr Perfect. It’s an epithet that somehow makes people uncomfortable. No one’s perfect. The last captain wasn’t, which is why he’s no longer captain. But so far, taking Cummins at face value has let no one down. All these years later and his hasty promotion to captain notwithstanding, what you see is what you get. Ask England.

Oh, that’s right: he did burn a DRS challenge. He’s a bowler, remember.