Australia’s first tour of Pakistan in 24 years has been plunged into uncertainty, but there is potentially a silver lining for the Ashes from the latest disruption to the international cricket calendar.

The reverberations of New Zealand’s decision to sensationally call off their white-ball tour of Pakistan due to security concerns hours before their first game on Friday are being felt on three continents.

England will decide this weekend whether its men’s and women’s teams will honour their commitment to tour Pakistan in October, in a call that has implications for the Ashes.

The likelihood of England sending an undermanned squad for the Ashes will become clearer over the next week when its players learn what biosecurity restrictions they will face during the Ashes.

If the ECB withdraws from the Pakistan series, it would give bubble-weary players extra time at home before this summer’s battle for the urn, which could prove critical to which English players decide to tour.

There have also been further reports casting doubt over star all-rounder Ben Stokes taking part in the Ashes, while England captain Joe Root’s availability is also in question.

Cricket Australia will monitor developments in Pakistan before it makes a call on whether next year’s tour will go ahead. 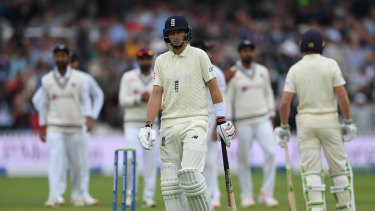 The cancellation of England’s tour of Pakistan could have significant implications for England, Joe Root and the Ashes.Credit:Getty

Australia’s men are slated to play two Tests, three one-day internationals and three Twenty20s in February and March on what would be their first tour of Pakistan since 1998 when then captain Mark Taylor made his famous 334 not out.

A source familiar with the issue said Australian player representatives were to conduct a customary pre-tour safety inspection during New Zealand’s series in Pakistan, but that can no longer take place.

“CA is monitoring the situation and will talk with the relevant authorities once more information becomes known,” a CA spokesperson said.

If Pakistan is deemed unsafe to tour, one option available to administrators is the United Arab Emirates, which has been Pakistan’s home away from home and has hosted series against Australia, most recently in 2019.

Pakistan Cricket Board officials are furious with New Zealand for pulling the pin on the three ODIs and five T20s, saying it had been a “unilateral” decision.

NZ Cricket issued a statement saying the call was made after an escalation in the New Zealand government’s threat level for Pakistan and advice from its security advisors on the ground.

The Black Caps’ withdrawal has support all the way to the top, with Ardern backing the move after a conversation with her Pakistan counterpart and former cricket great Imran Khan.

“When I spoke with the Prime Minister of Pakistan I conveyed our thanks for taking care of the New Zealand cricket team,” Ardern said in a statement to Reuters.

“I know how disappointing it will be for everyone that the game hasn’t gone ahead, but we totally support the decision that’s been made. Player safety has to be paramount.”

The PCB said its “foolproof security” measures were the “best intelligence systems in the world” and that there was “no security threat of any kind” for visiting teams.

New Zealand and Pakistan teams did not leave their hotel on the morning of the game.