A major cut in international match ticket prices outside school holidays to bring them closer to Big Bash levels is a lever Cricket Australia may consider pulling as a way of helping to bring crowds back after COVID-19.

Numerous past and present decision-makers spoken to by The Age and The Sydney Morning Herald on Monday agreed that pricing and incentives for spectators needed to be looked at for future summers, irrespective of crowds for the remainder of the season.

While the Adelaide Test’s enduring appeal as a destination event is expected to attract around 20,000 spectators to each of the first three days of the second Test against the West Indies from Thursday, Perth’s slim attendance following a trio of similarly paltry crowds for an ODI series against England has caused administrators to dust off past research on ticket sales. 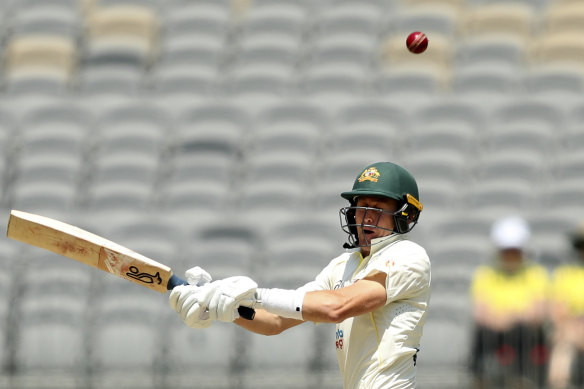 Marnus Labuschagne’s double century and century in the same Test was made in front of slim crowds.Credit:AP

There are plenty of these in the bottom drawers of CA executives and board directors, including a study conducted personally by current chief executive Nick Hockley that led to the introduction of extra categories and a lower, $30 entry point for seats.

One suggestion discussed internally the CA board table in recent years was a radical proposition of making Test match public entry free after day one, on the basis that the extra spectators attracted by the offer would then spend more money on food and drinks, while also making the game look more attractive for broadcasters.

Another piece of research, conducted by the marketing firm Forethought in 2013, found that the single biggest factor in cricket attendance was cost, and that among other factors including transport, food and beverage prices, the cost of the tickets themselves was the stand-out determining factor.

Those findings contributed to advertising campaigns for the BBL that stressed the cheap cost of a family ticket – just $42 – to the exclusion of almost everything else. That simple message was at the centre of BBL advertising for six years, before the tournament began to creak under the weight of a rapid increase to 14 games per team.

Many a debate has taken place within CA about the appropriate balance between accessible ticket prices and the money to be gleaned from sales, especially against the backdrop of broadcasters wanting full stadiums for the matches they air.

The Perth Test’s starting day of Wednesday made it difficult for many of those wishing to attend to make plans to free up space in the middle of the week. In turn, a Wednesday start also made it difficult for individuals or families to plan for cricket to take place on Saturday and Sunday, particularly given the West Indies’ modest recent record.

Many cricket followers have pointed not to the pricing of tickets at general admission level – which often sell out – but to the exorbitant rates for “A Reserve” seats, customarily those nearest to the behind-the-wicket viewpoint offered by broadcasters. Since 2018, those same spectators have also had to shell out the additional cost of Foxtel or Kayo if they wished to watch all games, with ODIs and T20 Internationals behind the paywall.

In Adelaide, those seats in the Riverbank Stand are priced at $115 per adult, and they were at similarly high levels for Perth, the limited overs matches against England and even Australia’s Twenty20 World Cup games.

Another of the arguments made by advocates for cheaper public tickets is that they need not mean a significant loss of revenue, since the most substantial portion of money gleaned from the staging of matches is via corporate boxes, which sold well for Perth and are virtually sold out for Adelaide.

Australia’s Test captain Pat Cummins offered a balanced view on the schedule and the crowds for Perth, which fell broadly in line with historical attendances for West Indies Tests in Western Australia – with the notable exception of the very first in 1975.

“It doesn’t really bother me to be honest – us cricketers don’t really know what day of the week it is half our lives,” Cummins said. “Obviously we always want to have big crowds, but there’s five Test matches to spread out over the next six weeks however they chop it up.

“The crowd that was here were great. I know back home, as a kid, always loved WACA Test matches because they went into the night. Always like to see bigger crowds, but those who turned up were great.”