‘Is it safe? No. Why is it there? Purely for money’: Injured England seamer Reece Topley blasts gimmicky ‘Toblerone’ boundary markers that wrecked his World Cup dream

Reece Topley had a special reason to cheer England on in their decisive victory over New Zealand at the Gabba, the ground where his World Cup dream came to a shuddering halt.

‘What happened to me will be a bit easier to take if the boys go on to win the trophy,’ says the man who was supposed to spearhead England’s World Cup attack here. ‘It would mean I wasn’t missed. I’d love to watch them go all the way.’

Topley wasn’t meant to be watching the Twenty20 World Cup on TV at home in London. He had battled more adversity than most players suffer in a lifetime, overcoming four stress fractures of the back in five years, to become one of England’s most important white-ball bowlers. 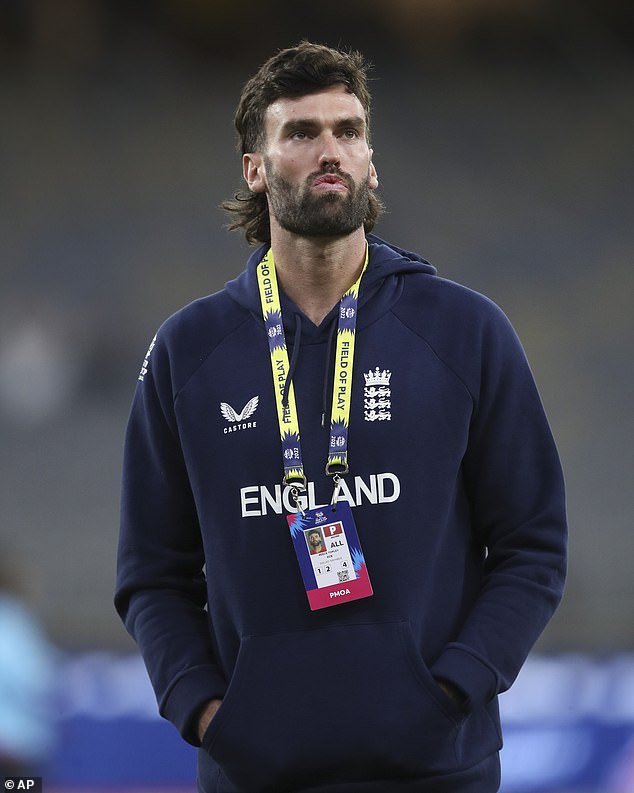 This was going to be the World Cup when all his hard work was finally rewarded with a pivotal role for Jos Buttler’s contenders. Then it all went wrong during catching practice ahead of a warm-up match in Brisbane that England did not even want to play.

‘I was sprinting as fast as I could around the boundary and I leapt on to my left foot to practise saves and my studs got stuck in the plastic coating on the marker,’ Topley tells Sportsmail. ‘I turned my ankle and landed on the side of my shoe even though I was upright.

‘I ruptured all my ligaments on that outside part of my ankle and tore some muscles around it as well. It went so far that those muscles took a bit of a battering.’

Topley, 28, knew something was badly wrong. ‘There was a little bit of shock,’ he says. ‘The physio and doctor came over and I said, “It’s quite bad”. I wasn’t screaming in pain. I just calmly said it’s quite serious but I knew I wouldn’t be playing for at least a month. 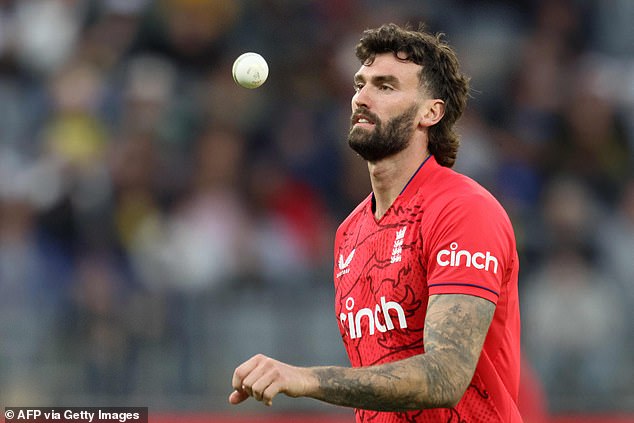 ‘I was running too fast and the last thing I remembered as I was tumbling was seeing the sole of my shoe almost facing me. It was hazy and it all happened so fast but that was the picture I had in my mind. I just sat there thinking, “I’m cooked”. The way it happened there was no chance I hadn’t caused damage.’

That damage would almost certainly not have been as bad, of course, had Topley not tripped on one of the 20 centimetre-high ‘Toblerone’ boundary markers at this tournament that are crammed full of ICC advertising. It was the sheer size of the marker that made the fall so serious.

Topley is forthright on the marketing tool, that was quickly condemned by England’s Ben Stokes after the incident. ‘People have said it’s a freak accident and all I can do is point out the ankle-high boundary advertising right next to where a player stands throughout a game,’ he says. ‘I don’t think that really is a freak incident.

‘It’s happened before and it will probably happen again. People think the “Toblerones” are fun and engaging but there’s something there that doesn’t facilitate anything. It can hinder you by being in your mind. 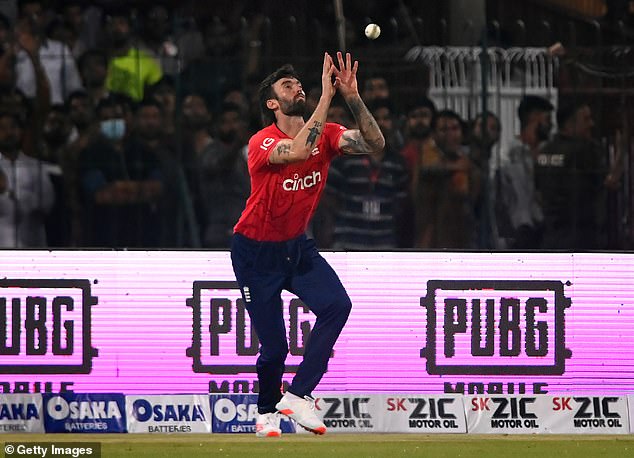 ‘Is it safe? No. Why is it there? Purely for money. It’s not there to enhance the playing experience or broaden the game in any way.’

Topley adds: ‘When it’s a muscle injury you can think: “Did I really prepare properly and give it everything? Was I an absolute saint, was I drinking enough water, was I in the gym enough and warming up enough?”

‘You can always attribute injuries to something, but when it’s an incident I couldn’t avoid it’s hard. You can have a go about the boundary markers and it will be a conversation that comes up I’m sure. It might take this for something to change but I don’t know who thought putting big advertising boards next to where a fielder is standing was a good idea in the first place.’

It soon became clear Topley’s World Cup was over before it had begun. ‘I don’t think as a bowler you could have a better World Cup to play in than this one,’ he says. ‘The wickets have been pretty helpful and that’s almost gone out of the game. 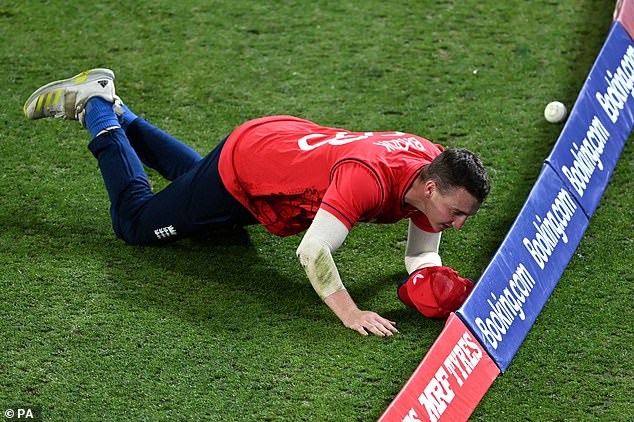 ‘There was a huge sense of an opportunity missed. I was extremely gutted. I never doubted I could contribute to England. I always thought I was worth a place in the squad but I just had to wait to get an opportunity. When that opportunity arose I felt I’d taken it and then this happened.’

The good news is that since the Surrey left-armer arrived home, his worst fears of an operation have not materialised. ‘I probably won’t need surgery because it’s developing pretty well,’ he explains. ‘It’s as positive as it can be because it means I can allow it to heal on its own and then build some strength back up in it to get it ready and firing for 2023.’

And the perennial back issues that saw him come so close to walking away from the game for good mean Topley can put this incident into perspective. ‘This injury is a minor setback in the grand scheme of things,’ he insists. ‘The timing of it is the worst thing but we are dealing with an injury that will take a couple of months to heal at worst. When it’s healed, I can get back bowling in no time.

‘I’ll have a chance to prepare properly for all the cricket next year and you don’t usually get that. You roll from tournament to tournament and quite a bit of the time you can be jaded and uninspired to start another competition. So I think this time out will invigorate me.’

Not least if England go on to win the World Cup.