Two feature race winners from Flemington's New Year's Day meeting will look to return to the track later this year with connections daring to dream of group 1 glory in the Melbourne Cup and the Newmarket Handicap.

Tralee Rose, a lightly raced four-year-old mare from the Warrnambool stable of Symon Wilde, won the 2800-metre listed race the Bagot Handicap in the style of a hugely progressive stayer, sprinting well clear of her eight rivals in the hands of Craig Williams.

It's a long way from January 1 to the first Tuesday in November, but connections of the New Zealand-bred mare are hopeful that if she can continue to improve she might be able to win her way into the Melbourne Cup by taking out the Andrew Ramsden Stakes in mid-May.

The Ramsden, over 2800m, gives the winner a golden ticket and guaranteed entry to the Cup.

Sirius Suspect, another rapidly improving type, took out the group 3 Standish Handicap for Flemington-based trainer Saab Hasan under a confident ride from Premiership-leading jockey Jamie Kah, dictating the pace in front before kicking clear of his seven opponents.

He is now likely to be aimed at the 1200m Newmarket Handicap in early March where he would almost certainly come in at the bottom of the weights over a course and distance – Flemington's "straight six" – at which he has excelled.

If he were to win or run prominently there his rating would go up enough for him to warrant an invitation to the riches of the Dubai carnival, where, COVID-19 permitting, connections could be tempted to target a race like the Al Quoz.

Tralee Rose appears to be a horse with limitless stamina – as her pedigree might suggest. She is by Tavistock out of a Zabeel mare called Star of Tralee. Zabeel, who died in 2015, sired three Melbourne Cup winners in Jezabeel, Might and Power and Efficient.

"I thought maybe the Adelaide Cup or the Andrew Ramsden would be a nice race for her. She's only going to get better. She's still a bit of a developing mare. I think in springtime we're going to see a really good horse. I was that confident over the 2800m. I've never seen one with a tank like hers. She'll stay all day," said Wilde.

For Hasan, the triumph of Sirius Suspect in the Standish was a career high. 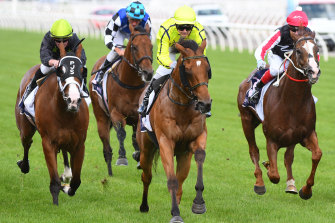 "He was always going to win a listed or group race. Tomorrow morning I'll put him on a truck. Darren [syndicate manager Darren Dance] and his team will look after him. He'll have a spell for a couple of weeks and then we might take him to the Newmarket," he said.

Kah said Sirius Suspect enjoyed running in the pack but knew what was required at the business end of races.

"That was just perfect. He [Saab] thought he might want to wander and lay out a bit late, and he did. He's a very horse-orientated horse. He likes being amongst them. He ran absolutely super," Kah said.