Valeya (12.10) appears to be thriving from a typically patient approach by connections who have found a good stepping stone for their progressive filly in the Prix des Sardiniers at Dieppe on Tuesday.

Septuagenarian trainer Alain de Royer-Dupre, who has trained more than 1,000 winners in a stellar career stretching back five decades, perhaps isn’t the force he once was but the likes of grand stayer Vazirabad and 2019 Prix Saint-Alary winner have kept his name in lights in recent campaigns.

In Valeya, the Chantilly-based trainer saddles a filly that looked to relish the combination of a step up to 12 furlongs and a switch to aggressive tactics at Compiegne back in March. 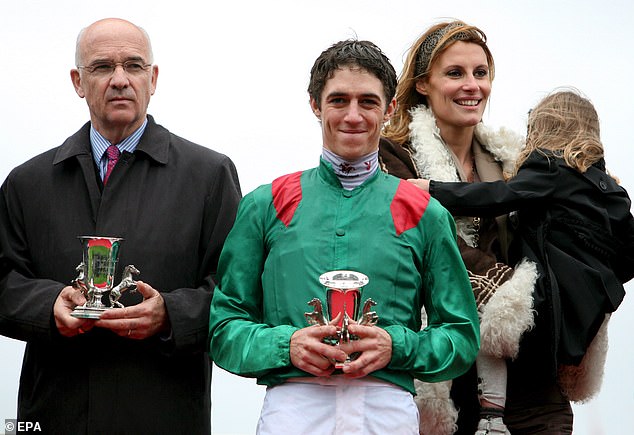 Valeya, trained by Alain de Royer-Dupre (L) will be a favourite to watch at Prix des Sardiniers

The grey daughter of Mastercraftsman was sent to the head of affairs early in proceedings by Christophe Soumillon from which point the duo set a steady gallop before seeing off their rivals, one by one, in the straight with the Belgian rider keen to utilise the favourable stands’ side rail.

The cut in the ground at Dieppe should play to the strengths of the selection who is reunited with jockey Nicolas Larenaudie for the first time since they combined to finish third at Chantilly in mid February.

Larenaudie, who has ridden four winners for the de Royer-Dupre operation in an embryonic career, may well find himself aboard a filly which has improved significantly since that initial outing and the duo are fancied to see off Pretorio and the Soumillon-ridden veteran Golden Wood.

The last-named makes the 41st start of a career that has seen him win narrowly twice in Meydan under Soumillon which may explain the reason the Belgian is keen to retain the association.