A Kentucky Derby winner has never stood at stud in Victoria, but plans are being made at Spendthrift Farm in Kerrie for last Saturday's group 1 champion Authentic to be the first.

And now, Spendthrift's Australian subsidiary, based in Victoria, is making preparations for the Kentucky Derby winner and future stallion to stand at Kerrie in what would be a first for the Victorian breeding industry. 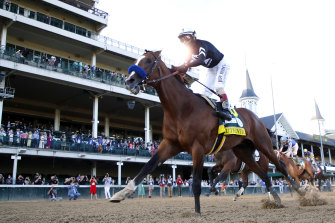 "I'd love to take the phone call from the boss and have him tell me the horse is coming," Spendthrift Farm Australia's general manager Garry Cuddy said.

"[Triple Crown winners] American Pharoah and Justify have both had great support in Australia in their seasons here [in the Hunter Valley] and this guy would be no different except he'd be standing here in Victoria. For the Victorian industry, it would be a massive plus I think.

"I'll use the boss' quote; We'd plan to have the horse here should he retire to stud next year but as the boss always says, you've got to have a plan so you could change it."

The horse was originally purchased by Newgate Farm's Henry Field as a yearling before they sold out of the horse in June, with Spendthrift buying the son of their own stallion Into Mischief.

In a rarity for American racing, syndicators MyRacehorse then did a deal with Spendthrift to syndicate 12.5 per cent of the racehorse, giving thousands of Americans the chance to part-own a Kentucky Derby runner.

"About 4500-5000 people shared in the ownership group of Authentic through the My Racehorse platform," Cuddy said.

"For someone like Mr Hughes, it's fantastic to win the race but, being the innovator he is, I think it would have been extra special for him to share the victory with so many owners.

"It's been well publicised it's the race that's eluded the boss and for him to finally win it, it was unbelievable. There was a recording of everybody at his house watching the race and the emotion in the room was fantastic.

"I had it on Sky channel and we screamed him home in the lounge room that's for sure."

Cuddy hoped the win would bolster Spendthrift's reputation, not only in the States but also in Australia.

"Obviously not only do we own Authentic, but we own his dad Into Mischief.

Authentic, who is expected to next race in the Preakness Stakes, would be the first Kentucky Derby winner to stand in Victoria. However, Spendthrift is already having success with American group 1 winners Omaha Beach and Vino Rosso being well supported by Victorian breeders.