Cricket Australia has had to scramble to get players from around the country into NSW as the coronavirus outbreak in South Australia causes logistical mayhem and threatens to disrupt the start of the international season.

And while Cricket Australia maintains the first Test against India from December 17 will remain in Adelaide, South Australian Premier Steven Marshall could not guarantee that.

"We are still hopeful that the cricket will go ahead. What we are doing in South Australia is putting all those people we think pose the biggest risk, those people that have come into contact with someone who is infectious, we have put them into quarantine as quickly as possible," Marshall said on Tuesday.

If the Test had to be shifted, Melbourne Cricket Club chief Stuart Fox said his venue would be ready to take the event. The MCG is already due to host the second Test from Boxing Day. The SCG is also open to the idea of replacing Adelaide if there is a late change.

"If the game had to be moved, the MCC would be ready to mobilise and the MCG would be available," Fox told The Age and Sydney Morning Herald.

In scenes reminiscent of the exodus from the winter football codes earlier this year, when players had to leave Victoria at short notice to avoid border controls, CA on Tuesday worked to get exemptions to put West Australian, South Australian, Tasmanian and Queensland players on flights as soon as possible for Sydney to ensure they can take part in the white-ball series against India, beginning November 27, and the Australia A matches against the tourists in December. 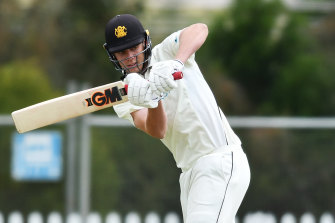 Cameron Green is one of the ODI players in quarantine thanks to new and stricter restrictions on people who has come from South Australia.Credit:Getty Images

The one-day international and Twenty20 series will be split between Sydney and Canberra, while the two Australia A matches are in Sydney.

CA took the decisive action after the four states placed more stringent restrictions on travellers from South Australia, which recently held the opening rounds of the Sheffield Shield and is now dealing with a coronavirus cluster in Adelaide's northern suburbs.

As concerns rose, the Adelaide Strikers also jumped on a plane to ensure they could take part in the Big Bash League. Some players had been on the golf course and even on Kangaroo Island when told they needed to rush home and pack. The Strikers will now have a pre-season camp in Coffs Harbour.

Their BBL campaign begins in Hobart on December 13 and, under current border restrictions, they would have been required to quarantine for a fortnight in Tasmania if they had gone there directly from Adelaide.

Alex Carey, the Australian white-ball and Strikers' gloveman who is quarantining in Sydney, said players were prepared to do what was required.

"Unfortunately, the news out of Adelaide wasn't great over the last 24 hours. It's great to see they [CA] have been really proactive in escaping what they can which, hopefully, will allow them to play the first BBL game as scheduled," Carey said.

Carey's wife Eloise and young child Louis were among those who fled South Australia for Sydney.

CA is also fearful several state borders could be shut, with players then unable to leave their home states, thereby ruining a season that is worth $300 million to CA. However, CA does not have any concerns about Victorian players travelling to NSW, with the NSW border to re-open on November 23.

Players who have gone into quarantine in recent days, including emerging Western Australian all-rounder Cam Green and Tasmanian Matthew Wade, can cease this as soon as they get to Sydney ahead of the white-ball series. Players, however, will need an exemption to train in hubs.

WA spinner Ashton Agar returned home from Adelaide early and his 14-day self isolation period finishes on Thursday. The Sheffield Shield was held in a bio-secure bubble, reducing any chance players had of testing positive to the virus, which has up-ended the world.

Queensland players, including Marnus Labuschagne, and coaches who took part in Adelaide had a COVID-19 test on Monday and are now self-isolating.

CA is also working to finalise where a chartered plane carrying international BBL players will land. One plan had been for it to fly into Adelaide but Sydney may now be the preferred option, with players to quarantine for a fortnight.

The Australian players who took part in the Indian Premier League and the Indian squad are in quarantine in Sydney, and will not be free until a day before the opening ODI match, although they are able to train in the meantime under the guidance of Australian great Ricky Ponting and Andrew McDonald, Justin Langer's senior assistant. Ponting and McDonald were franchise coaches in the IPL.