Trainer Ed Walker is hoping English King can banish the frustrations of his fifth place in the Derby when he tries to justify favouritism in the John Pearce Racing Gordon Stakes.

Frankie Dettori’s mount was one of the leading hopes for the Epsom Classic after winning the Lingfield Derby Trial impressively.

But Walker was left wondering what might have been as English King clocked the fastest time for the final three furlongs at Epsom after all-the-way winner Serpentine was allowed to poach an unassailable lead without over-exerting himself. 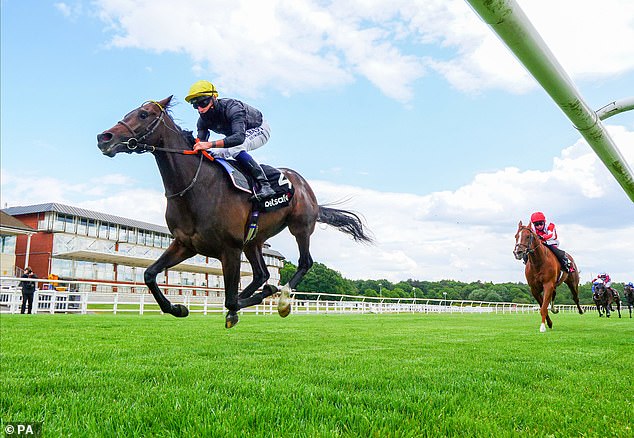 Walker said: ‘English King came out of the Derby really well, much better than I’d hoped. I’d never had a runner in the Derby before and I envisaged it hitting a horse for six. The race wasn’t run at the normal tempo of a Derby.

‘I don’t think any of us expected the race to be run in the way it was.

‘It was a perfect storm of various factors, not just for English King but for a lot of horses in the race. It was just frustrating when you never felt you got a run for your money.’

The Gordon Stakes is a Derby reunion. Also in the line-up are Epsom runner-up Khalifa Sat, sixth Mogul and 10th Highland Chief.

For Al Aasy, winner of the Bahrain Trophy at Newmarket, and Glasgow Stakes winner Subjectivist the race is a St Leger trial but the final Classic of the season at Doncaster next month is not yet on English King’s agenda.

Walker added: ‘My gut feeling is that he is not a St Leger horse. He has a lot speed. For me it is more of a trial for the (Group One) Grand Prix de Paris than the St Leger.’