I first met Shane Warne in Mumbai when I was the adviser to the Australian team that toured India in February, 1998.

Until then, I’d had the distinct impression Australia was an egalitarian country. It was shattered during a meeting with newly appointed Australian team manager Steve Bernard and the genial Dr Cam Battersby, who was the Australian team director, the chairman of the Queensland Cricket Association and a director of the Australian Cricket Board, as it was then called. 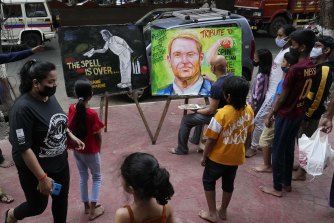 Indian artist Sagar Kambli makes a painting of Australian cricketer Shane Warne as a mark of tribute on a sidewalk in Mumbai, India.Credit:AP

A few hours after I had fetched the team from the airport, I sat down with these two gentlemen in the team hotel, seeking to bring them up to speed about the tour, India and any potential issues they may bump into.

They listened patiently to my monologue for about 10 minutes and said it all sounded fine and not to worry about the team generally. But just make sure of one thing, the added: “Please ensure that Warnie is looked after and happy.“

I was shocked. So, Warnie was special? It turns out their concern was justified, as Warnie did have the ability to attract headlines. On that tour, it was the innocuous matter of his far-from-adventurous diet and his love of baked beans.

I am sure one of Warne’s enduring disappointments was his performances in India. But, he never offered excuses or gave reasons.

I know for a fact that he was not fully fit on any of the three tours he went on. He had a shoulder injury, and a finger injury. He was not even half the bowler we knew him to be when he played in India – and it was simply bad luck. He gamely battled on.

One day in the famous Nagpur Test of 2004, he bowled a few bouncers. I said to former Australian captain Allan Border, who was then chairman of selctors and who was sitting with me in the dressing room, that this was ridiculous. Had Warnie lost it, I asked.

AB had a momentary flash of anger and set me right. He asked whether I realised that Warnie was the greatest team man of all? I persisted with my point – why is he bowling bouncers?

He pointed out the bowlers at the other end must have wanted to attack the batter, so Warnie was making making sure he did not concede a run off the last ball of the over. It would have been a strategy decided on by the whole bowling group.

“But isn’t Warnie our main strike bowler?” I asked. 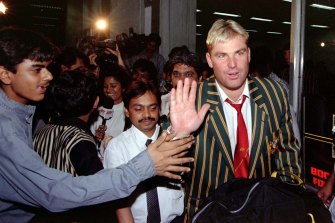 A cricket fan tries to shake hands with Shane Warne after the Australian team’s arrival at Mumbia airport in 1998. Credit:Reuters

“Mate, you don’t understand,” said AB. “Shane is such a team man, he would be the first to put his hand up even for a holding role, for the greater good of the team.”

I was dumb-founded and Warnie went up even higher in my estimation.

Of course, he was no angel, but he was definitely a decent human. He was a person whose foibles and frailties were unusually magnified and amplified, but also a loyal man of integrity, who was true to himself.

He could be infuriating, self-indulgent and many of his former teammates and friends found him to be so at various times. But most forgave him and simply could not resist his savoir-faire. He could be petty sometimes, but he was a gracious opponent once off the field. And he was a man who was extraordinarily generous with his time and favours.

For the fans, Warne was the cricketer who always signed autographs and posed for photographs. On at least a couple of occasions in India, I had to round him up as the team bus was about to leave the ground, much to the annoyance of those patiently waiting in long queues for him to sign autographs.

He was the one chap who could be relied upon to oblige and be polite to all the adoring though demanding Indian fans. And he was not just any old superstar in India, he was an absolute rock star for tens, maybe hundreds, of millions, just second in the pecking order to the great Sachin Tendulkar.

In the past half a century, there has not been an overseas cricketer who generated as much excitement in India or one who was as venerated as Warnie. He was the Pied Piper of Hamelin. Steve Waugh is similarly respected but didn’t have Warnie’s natural flamboyance.

Sadly, my last contact with him was during the Brisbane Ashes Test at the start of this summer. I signed off our chat with some unsolicited advice: “Go easy on Starcy”, in reference to his criticisms of Mitchell Starc. I suspect he didn’t appreciate it, but now I will never know.

My mentor, the late Vasoo Paranjape, whose informal assistance aided Australia in beating India in 2004, reckoned Warne was a greater bowler than even Subhash Gupte. Who you may ask but most Indians who saw Gupte in the 60s and Shane Warne 30 years later compared them endlessly. Some were unpersuaded but Vasoo opined that Warne was the greater bowler “because he had the heart of a lion”.

And, now that lion has left us. RIP, Warnie.