The ecstasy and agony of David Warner’s career-saving double century left Australia on course for a series victory over South Africa but with a rapidly filling casualty ward.

Having struggled with cramp on a scorching Melbourne afternoon, Warner retired hurt for 200 after seizing up while celebrating the milestone on day two of the second Test. Australia went to stumps at 3-386, a lead of 197, with a rollicking Travis Head on 48 not out from as many balls.

Boxing Day bowling hero Cameron Green then suffered an injured right index finger and retired hurt for six. Opening bowler Mitchell Starc already has tendon damage to a finger on his bowling hand, which has him in trouble for the last Test in Sydney.

Resuming on 32, Warner glided to his first century in almost three years, then hobbled to his double ton. His last act was to celebrate that defining double century, first by going down on his knees then by trying to execute his trademark leap, before his body all but shut down. Warner, barely able to walk, was helped from the field by medical staff.

Many in the crowd of 42,614 stood in appreciation to cheer him off the ground. That figure took the combined two-day attendance to almost 108,000.

Warner not only emphatically answered questions about this future, having gone 27 innings without hitting triple figures, he also confirmed what a vital part of the team he is with an important year ahead. 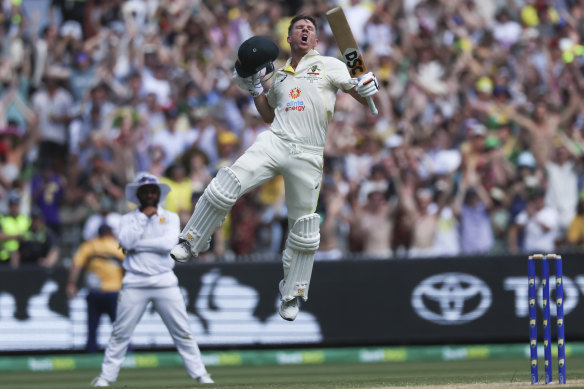 David Warner leaps in celebration after reaching 200. He retired hurt after seizing up with cramp shortly afterwards.Credit:AP

A series victory against South Africa will reinforce Australia’s standing as the top-ranked Test team in the world and all but confirm their place in the World Test Championship, most likely against India at The Oval next June.

First, though, Warner has a tour of India next month, where he has averaged only 24. After the World Test Championship comes an Ashes tour of England, where he averages 26 and was Stuart Broad’s bunny last time.

Warner’s place on those tours was becoming less certain with each low score until Tuesday, when he made his 25th Test century and 19th in Australia. It was the third time he had reached 200. Significantly, his average this year has risen from under 21 in 10 Tests to almost 32 in the 11th and last of 2022. Joe Root is the only other player to score a double century in his 100th Test.

Fittingly, it all took place in front of the Shane Warne Stand. The recently departed great would sometimes muse who his scriptwriter was after monumental moments of magic, particularly on his beloved MCG.

It was not all fairytales, though. Marnus Labuschagne was run out for 14 after a terrible mix-up with Warner, who surprised his batting partner by calling for a second run on a misfield.

Two balls earlier Warner, on 47, appeared to have reached his first half century in 13 innings when he attempted to hook Anrich Nortje and the ball flew over the wicketkeeper’s head to the boundary. However, the ball had hit Warner’s helmet, forcing a delay as it was changed.

When he did reach his half-century, Warner offered a perfunctory raise of the bat to generous applause, as if still smarting from the unfortunate and unnecessary loss of Labuschagne. It was the same reaction when Warner made the 78 runs needed to reach 8000.

Warner and his batting partner for much of Wednesday, Steve Smith, showed that redemption is a beautiful thing. The villains of Sandpapergate four years ago, who flew home from South Africa on separate planes, cajoled and encouraged each other, shook hands at partnerships and hugged for major milestones.

By the first of two drinks breaks during the last session, they had added 239. Such were the draining conditions as temperatures reached the high 30s that the pair sat in plastic chairs carried to the middle of the arena with towels draped over them rehydrating before Warner received more treatment.

Then first ball after drinks, Smith (85) guided a short, wide ball straight into the hands of the gully fielder.

A tough day for the South African bowlers became tougher for Nortje, who was flattened by a low flying spidercam at deep backward square leg, briefly delaying play while teammates, umpires and the batsmen checked on his condition. He was fine but the spidercam operators were no doubt severely embarrassed.