Before the Gatting ball, Graham Gooch done round his legs, the Daryl Cullinan summer, John the bookie, the hat-trick, the tabloids, Basit Ali at the SCG, Herschelle Gibbs at the World Cup, the injuries, the drugs ban, the comebacks and the legend, Shane Warne generated the unmistakable sound of a cricket ball ripped so hard that it hummed in flight towards its quarry.

Warne was the greatest spin bowler of them all for a host of reasons, but none would have been possible without that hum. At a time when physicality in cricket was mostly associated with fast bowlers, Warne had the fingers, wrist and shoulder of an aspiring footballer, and it made a world of difference to his leg break. 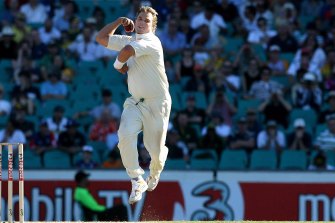 Shane Warne’s bowling action, about to unleash hell on another unsuspecting opponent.Credit:PA

Those prodigious, if rough-hewn, skills got Warne into the cricket system, the academy in Adelaide, a few games for Victoria and then a debut for Australia in January 1992. But they were shaped into something that would win Test matches by a couple of fellow leg spinners: Terry Jenner and Bob Simpson.

Jenner, who was rehabilitating himself from a prison term for embezzlement at the time, saw a kindred spirit in the young Warne, and gave him some of the tough love that the older man himself may have needed at a young age. Warne was implored to get himself fit, and to groove his action. That winter, before a tour of Sri Lanka, he shed 15kg. 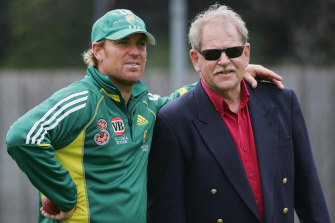 With the Australian team during his early series and tours, Simpson summed up Warne’s cricketing gifts and augmented them. A line around leg stump, due to Warne’s sharp turn, the addition of a round-the-wicket line of attack after Simpson demonstrated the stratagem to his pupil in the nets in Perth, and a continual encouragement that Warne make use of his whole body in his action and complete his follow through with energy. You can see that energy in the Gatting ball.

Later, after Simpson’s exit, Warne would at times rely too much on his fingers and shoulder to impart vicious spin, contributing to the finger and shoulder injuries that forced him to evolve. Those injuries cost him reliable use of the flipper, largely replaced by a “slider” released with minimal spin but maximum deceit.

The enormous power generated by just eight steps to the crease also hurt his legion of imitators, most of whom would have needed a proper run up to get close to the same explosive delivery.

What Warne also developed with Jenner, Simpson, Allan Border and others at this early stage was something else that would come to be just as important as the spin initially, then even more critical after physical ailments reduced his natural powers of torque. He moulded, with confidence and time, perhaps the most exquisite set of theatrical skills and instincts ever wrapped around spells of bowling.

Teammates, particularly the integral Ian Healy and captain Mark Taylor, were consulted at key moments. Opponents were spoken across, distracted by field changes, hoodwinked into thinking the ball was spinning even if it was not.

And umpires were engaged in amiable dialogue and a little coaching, always kept on the lookout for the straight ball. By and large, they repaid Warne’s friendliness with raised fingers. The New Zealand umpire Steve Dunne has recalled how Warne once confided of striker Andrew Jones, “He thinks he can pick me.” After three regulation leg breaks, Warne side mouthed to Dunne “this is it”. A straight one followed, plumb lbw.

The night before Warne and his offsider Tim May shared all 10 England wickets in a Test match at Edgbaston, there was much discussion of how to find a way past the stentorian figure of Gooch.

Workshopped with Border, but also shared with at least one touring cricket writer, was the suggestion that, on a tinder dry pitch, Warne could pitch the ball wide enough of leg stump to avoid Gooch’s pad, but close enough to leg stump to hit it. When the plan came off the next day, there was more elation than for Gatting – planned dismissals of quality players were to be a trademark.

What Warne developed into over subsequent years was a bowler of immeasurable presence but also versatility. So many of his best moments came against South Africa, a cricketing country that liked to play the game in a way the Australians felt they could counter, none more so than Warne.

In his youth he destroyed Cullinan and company in 1993-94, but then in 1997, after finger surgery, returned match figures of 5-82 from 40.2 overs in Port Elizabeth, used effectively as the third seam bowler on a greentop after Australia chose Michael Bevan as a No. 7 bat and wrist spinner. Mark Waugh then played the innings of his life to win Australia the match and the series, but it would not have been possible without Warne. With precious little spin on offer and with a strong wind to push into, Warne emphasised accuracy; South Africa, taken in by his aura, did not dare attack him.

Two years later, it was against South Africa at the World Cup that Warne finally ripped the proverbial band-aid from his shoulder after surgery in 1998. It’s largely forgotten that he bowled a beautiful spell to them in the match at Headingley that Steve Waugh would win off his own bat. What everyone remembers is the viciously spitting leg break to defeat Gibbs at Edgbaston, the breathless exhortations of teammates to “come on”, and the match award-winning performances in both the semi-final tie and the final thrashing of Pakistan at Lord’s.

In 2000, those memories fresh in the judges minds, Warne was voted one of Wisden’s five cricketers of the 20th century. His legend had already been made; batters around the world then had the difficult task of staring him down for another seven years.

The adaptability of Warne in cricket maturity was focused by two things: the role he played under Waugh, who often preferred to send opponents into bat rather than trying to bowl them out last, and the long-term challenge of India. Twice, in 1998 and 2001, Warne was battered in a losing team, though on neither occasion was he physically in top shape, first on account of his shoulder and then a recent recovery from a broken finger.

In between those tours in 1999, he flummoxed Sourav Ganguly and Rahul Dravid in Adelaide and then outpointed Sachin Tendulkar in a searching spell at the MCG. But the role Warne played on the winning 2004 tour of India was instructive as to how he was able to reshape himself. Whirring through 140 overs in three matches, he winkled out 14 wickets at 30.07 and successfully prevented India from attacking him. Meanwhile, Glenn McGrath and Jason Gillespie took advantage of Warne’s pressure at the other end.

Warne’s final cycle, encompassing the 2005 and 2006-07 Ashes series, brought all of this together. The natural ability, the tactical sense, the theatrical sleight of hand and the big stage. In England, Warne was a one-man salvage operation for a series Australia could easily have lost by much more than the final 2-1 margin. At home, he instilled belief in a young Michael Clarke that the memorable Adelaide Test was far from lost when they batted together on the fourth day.

Next morning, taking the ball from the Cathedral End, Warne willed Australia to victory in the same way he had done at the 1999 World Cup. He took only four of nine wickets to fall that day, starting with a dubious bat/pad decision to account for Andrew Strauss, but owned the occasion like Mick Jagger on stage. Nothing was going to stop him, and he would bowl Strauss through the gate a couple of weeks later to claim wicket No. 700 at his beloved MCG. 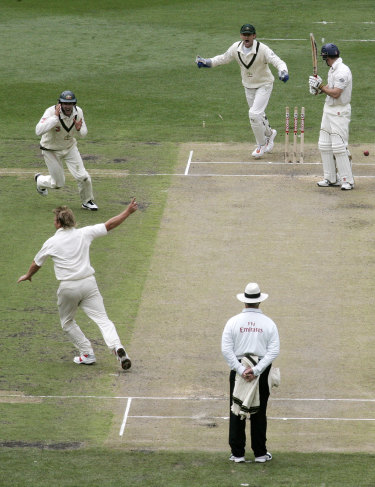 As of now, Warne’s name will emblazon The Great Southern Stand from which he bowled so many of his best spells. The hum of the ball spinning out of his fingers had long since been drowned out by the noise of the crowds chanting his name. But none of this extraordinary and now maddeningly short tale could have happened without it.