Home » Sports News » ‘We feel as if he’s won’: Podium finish a Tour victory for Porte

Richie Porte's journey into cycling as a teenager riding around Tasmania on a borrowed bike is set to culminate on Sunday when he becomes only the second Australian to stand on the podium at the Tour de France.

Porte (Trek-Segafredo) is third on the general classification behind Slovenians Tadej Pogacar (UAE Emirates) and Primoz Roglic (Jumbo-Visma) ahead of Sunday's final and largely processional stage into Paris. 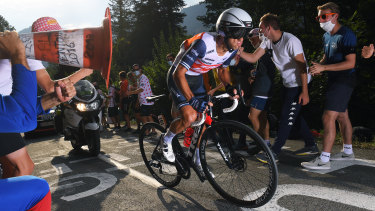 The result for his parents, Ian and Penny, and the Australian cycling community is as good as a win after four years of fighting for the yellow jersey and overcoming blunders and bad luck.

"As I said to my husband this morning, that young man [Pogacar] is 22 tomorrow and I think Richie had only done one year as an amateur at that age. He didn't start until late so that's really the amazing thing," Penny Porte told The Age and The Sydney Morning Herald on Sunday.

"I don't think he got on a bike until he was about 15 or 16 and it wasn't his own bike, it was just a borrowed one. When you hear a lot of the cyclists speak, they've been riding since they were nine years old.

"He's a very private person. He doesn't always say what he's dreaming of, he just goes about his business and achieves it without talking too much and that's basically Richie. 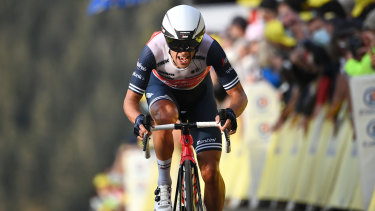 The Tasmanian spent about the first half of his professional career famously assisting Tour champions Alberto Contador, Bradley Wiggins and Chris Froome to victory before leaving Team Sky at the end of 2015 to try and win the race himself.

Porte finished fifth overall in his first outright crack at the yellow jersey in 2016. He crashed out of the 2017 Tour after his former Sky teammates pointedly heaped pressure on him in the lead-up, playing on perceived mental weakness. Porte was unlucky to crash out again in 2018 and last season was just happy to make Paris in 11th.

"It's amazing that Richie will stand on the podium next to two Slovenians, one of whom [Roglic] was the outright favourite who has been on the podium in Grand Tours and knows what to do and has come from one of the most professional teams, and the other a 21-year-old guy [Pogacar] racing just out of instinct and heart," retired Australian professional Mark Renshaw said.

"He deserves all the accolades he's going to get because he's helped so many riders win the Tour de France. It's fitting that he's finally going to stand on the podium because he's been one of Australia's best ever GC riders."

Porte in the self-described "twilight" of career was inhibited by and equally profited from restrictions stemming from the COVID-19 pandemic this season.

The Tour Down Under champion was forced to train on his balcony for a stint under severe lockdown rules imposed in Monaco. However, the strict protocols that organiser ASO enforced throughout the Tour in which the access of media and fans to riders was severely limited due to the ongoing threat of coronavirus worked in his favour. Porte was able to focus just on racing, without the outside commentary that he takes personally and has previously brought him unstuck.

"He seems a lot more happier and content. When I was living in Monaco and training with him pretty regularly, I guess his character then, he wasn't has relaxed as he is now. To be relaxed like that and perform is pretty special," retired Tasmanian climber Wesley Sulzberger said.

"I was really impressed with how mature he has become. He's in a different stage of life. He's got a new daughter he's about to finally meet when he gets back home and he seems very happy with his partner, Gemma.

"From his performance and the way he delivered, I'd call that delivering – a podium spot at the Tour de France. That's pretty huge. I mean Cadel has won it but to have Richie up there, I think it's on the same level."