Ireland's champion trainer Aidan O'Brien has never won the Melbourne Cup, but his chances have been boosted after his three-year-old Tiger Moth received a 2.5kg weight penalty to rocket up the order of entry.

Before the weekend, Tiger Moth sat 53rd in the order of entry for the Cup on 50kg, having produced a then career-best performance in the Irish Derby, running second to Santiago. 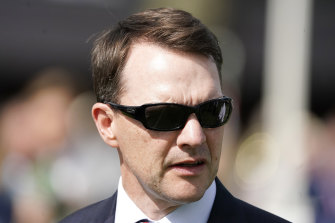 But after his "dominant win in the group 3 Kilternan Stakes" at Leopardstown on Saturday, beating Lloyd Williams' boom horse Buckhurst in fifth, Racing Victoria's executive general manager of racing and chief handicapper Greg Carpenter said the horse had done enough to guarantee his spot in this year's Cup with 52.5kg.

"When releasing the weights, I identified Tiger Moth as one of the more difficult horses to assess given he had only run three times," Carpenter said.

"He was beaten in a 1400m maiden on debut, then won a maiden over 2000m and was beaten a head in the group 1 Irish Derby by stablemate Santiago.

"His dominant win in the group 3 Kilternan Stakes now supports his Irish Derby performance and the form from the Derby has been enhanced with the winner Santiago finishing third to Stradivarius in the group 1 Goodwood Cup and then over the weekend he was fourth, beaten 1.5 lengths, in the group 1 English St Leger.

"The 2.5kg penalty takes Tiger Moth to 1kg below fellow northern hemisphere three-year-olds Santiago and Russian Camelot, who both have 53.5kg in the Melbourne Cup."

O'Brien last year attempted to break his Melbourne Cup drought with Il Paradiso, who was also a northern hemisphere-bred three-year-old with 52.5kg, but the unlucky stayer flashed home late to snatch third.

Tiger Moth's stablemate Anthony Van Dyck, who will carry the top weight in this year's Cup should he travel to Melbourne, also won over the weekend, however, Carpenter decided not to issue a penalty.

"We have elected not to penalise the Prix de Foy winner Anthony Van Dyck for the Melbourne Cup where he already has 58.5kg and is the topweight in the race," he said.

"He had finished 2.5 lengths ahead of Stradivarius in the 2400m Coronation Cup earlier in the season and [Sunday] night again beat Stradivarius over 2400m this time by only a short neck.

"Anthony Van Dyck already faces a significant challenge with 58.5kg in the Melbourne Cup, with Think Big in 1975 the last horse to carry more than 58kg to victory."

Horses must quarantine in Europe from Wednesday if they are to make the trip to Melbourne.

Two other O'Brien-trained horses, Mogul and Armory, both of whom had their international rating lifted as a result of their weekend performances, are also leading contenders to travel to Melbourne.

Armory moved from 32nd to 24th in the Caulfield Cup order of entry on Monday, while Mogul has risen from 34th to 25th.

Meanwhile, Williams is preparing to bring Buckhurst, Master Of Reality, Twilight Payment and Pondus – all of which are trained by O'Brien's son Joseph – to Melbourne.

Master Of Reality, who was second across the line in last year's Cup before being demoted to fourth, and Twilight Payment have both been in winning form in Europe leading into the trip Down Under.