Joe Root has said he wants his team to be brave and aggressive in their approach to this series. What the England skipper should do is take a leaf out of Pat Cummins’ book.

There are times when a captain can get too funky with their tactics though this is not something you could accuse of Root. He errs on the side of conservatism, when he would be better off being creative with his tactics and bowling changes.

Watching Root in the field, I feel there are times when he is sticking rigidly to a predetermined plan, rolling through his bowlers in a set order, rather than thinking on his feet and making moves based on the constantly evolving game situation.

This is not to say that you throw your planning out the door but situations change and different strategies are required. The pitch can play differently, the weather can have a major say on whether the ball starts swinging.

Then there’s being able to manage your players. You may make a change to get a bowler into the game to give him confidence. That is creative captaincy, which I do not think we have seen enough from Root.

If you want an example of how this can be achieved, have a look at how Cummins handled his first game in charge. 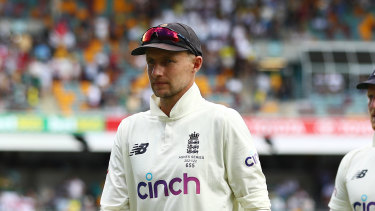 Joe Root leaves the field after the Gabba loss.Credit:Getty

The most encouraging aspect of Cummins’ debut as captain was not the first day when everything worked but on days three and four when things were going against his team.

The conditions were hot, England’s batters were on top and he was down a bowler in Josh Hazlewood. These are times when as a captain you can get grumpy, and your team follows your lead and loses their way.

Cummins, though, stayed calm throughout. He tried his spinner early on the fourth day, gave Marnus Labuschagne a go when he had runs on the board, and bowled Cameron Green at good times.

The way he deployed Hazlewood was particularly intelligent. Aware of his dependable quick’s physical struggles, he saved him for one spell with the second new ball when he would have maximum impact and was rewarded with a key wicket.

Not taking the second new ball immediately so that he could give Green and Lyon an extra over each after they had struck showed game sense and flexibility. His willingness to listen to his vice-captain, as seen in Ben Stokes’ second-innings dismissal, is more proof he will not be a stubborn leader.

These are some of the things I look for in an astute captain who is not wedded to decisions made in pre-game meetings.

This is not to say Cummins already has the measure of a man who is two games short of equalling Alastair Cook’s record for most Tests as England captain.

Despite Australia’s convincing win, Root can approach the second Test with a degree of optimism, knowing that for periods in Brisbane his team was very competitive, and will be better for the run.

Conditions in Adelaide with the pink ball will suit England more, though the predicted impact may be overstated as Australia have a perfect record in day/night Tests with eight wins from eight games.

For England to win, they need to nail the start to both their batting and bowling innings. James Anderson’s return will help the latter, though they need to get their lengths right and be more consistent as the ball gets older and less responsive.

Their batting remains a major concern, particularly with Rory Burns out of sorts. He has shown he can be a dogged competitor, but my worry is with a technique like his he needs to be very confident in his game.

He creates many opportunities for the bowlers with the manner in which he walks across the crease and closes the face of his bat. It leaves him vulnerable to being bowled, lbw, and catches behind the wicket.

You could sense his lack of confidence in the second dig when he did not face the first ball, just the fourth time this has happened in his 264 first-class innings.

We are only a week into the Ashes and without wanting to be overdramatic the series will be all but over if England lose here. If Australia go 2-0 up, I cannot see them recovering.

Mark Taylor played 104 Tests for Australia, 50 of them as captain, and led the country to three Ashes victories. He is a former Cricket Australia board member.

Blown back to the future: the loved-loathed Smith thrust back into the spotlight