What with everything else, it’s easy to forget that the biggest danger to Australia’s Test summer is the oldest one. Never mind bubble breaches. Don’t be distracted by the daily mood swings of various state premiers. Don’t blame every scheduling headache on the floor-lickers of Avalon Beach. The turn-off for cricket followers will have nothing to do with COVID-19; it will be an Indian touring team that plays as if it has given up the fight. 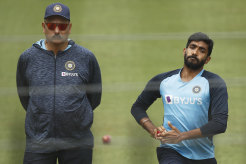 Now the big one: India underperforming in Australia? Tell it to the judge. To everyone else in the cricket world, Seven (which is not the owner of this masthead) was like the family blowhard who turned up at Christmas a couple of years ago boasting about the new property he had bought himself, wanting applause because of how much he paid. Family members sidled off to the kitchen and spluttered, ‘He paid what?!?’

A year later, he showed up again, blaming all and sundry for how the thing was sending him broke. Mostly, he blamed the vendor.

In this case, Cricket Australia has delivered what it sold, but got a deal of a lifetime from former Seven boss Tim Worner, who, unlike several of the board members who oversaw that transaction, is now gone. If the prime movers behind the purchase had been paying attention to cricket, they would have known that the BBL had already passed its growth phase. They would also have known that Indian teams coming to Australia, historically, have been world champion underwhelmers.

It’s easy to forget the disparity between talent and output on Indian tours of Australia, but it has been as much the norm as Australian teams playing poorly in India.

Teams of 20 to 30 years ago, with Sachin Tendulkar, Mohammed Azharuddin, Rahul Dravid, VVS Laxman and Anil Kumble on board, were routinely wiped out on Australian soil. The 2003-04 and 2007-08 teams were more combative and changed the passive ‘brand’ of Indian teams abroad, but still lost. MS Dhoni’s 2011-12 team spent a summer viewing Michael Clarke without even going on Instagram. The team Dhoni and Kohli brought in 2014-15 was better, but were ground into submission by Steve Smith and David Warner.

If Australia are that dependent on Smith and Warner, what percentage of India’s strength comes from Kohli? We’re about to find out. The worrying sign for the tourists in Adelaide was on display before their calamitous second innings. Five dropped catches, inattentive running between wickets and slack decision-making indicated a team that is long on surface gloss but short on sand in the guts. Their failure to take their opportunities on days one and two caused a strain leading to the snap on day three, by which time some of them looked like they were already thinking of home.

Why Australian and Indian teams find it so difficult to win on each other’s turf has long been analysed, but eludes a solution. India can’t blame bubble life: for their Test cricketers, the bubble is life. There just seems to be something about the foreignness of each land that breaks down the inner resources of some individuals and teams. I recall a leading Australian player, who shall remain nameless because he is a very nice man, exclaiming across a gilt-and-marble five-star Mumbai hotel lobby on the second morning of a tour: "Can you believe this place?" Thinking he was sharing my own high, my euphoric overload from the sheer everything-ness of India, I replied, "Fantastic, isn’t it!" He looked at me as if I was pulling his leg. "Whaddaya mean? Place is a s—hole!"

Nowadays, Australian and Indian cricketers are exposed to each other’s environments often enough to get over whatever naivety they bring with their baggage, but you wonder if there is a deep-down inability to comprehend and find peace in these most different of countries, and if the underlying stress is laid bare under the public examiner’s table of Test cricket. After Adelaide, India’s cricketers were subject to a ferocious social media reaction from home, a lot of which ran along the lines of "These millionaires, they’ve already given up, they’re not hungry enough, they don’t care." It was mostly phrased without patriotic fellow-feeling, let alone courtesy, but the accusation that this team is delivering little comfort, distraction or inspiration to their country, which is in such desperate need, is powerfully felt.

Team India have three matches to show what is inside them. It’s easy to forget, in Australia, how few eyes are on our national cricket team compared with those on India. What is at stake, there, is far more consequential than the Seven Network’s incoming gripes about falling ratings and one-sided cricket (whoda thunk it?).

It also came as a surprise to some TV executives, apparently, that India’s cricket chiefs call the shots. But the true consequences are not local, they are global. India’s influence in world cricket is such that a strong Indian Test team is good for the very future of Test cricket. A weak Team India, or one that is perceived as spoilt and unpopular, will only accelerate the tectonic movement towards more and more white-ball cricket, in which India are ever-competitive, and the pain, when it happens, only lasts half a day.

You could almost say that if Tim Paine’s team were thinking strategically about the health of Test cricket, they would go easy on India and make a game of it.