England’s coach and sole selector Chris Silverwood has cut a swath through the touring side’s line-up ahead of the Boxing Day Test, leaving out Rory Burns, Ollie Pope, Stuart Broad and Chris Woakes from the side that was battered in Adelaide.

Zak Crawley will come in to open the batting, Jonny Bairstow returns to the middle order (although Jos Buttler retains the gloves), Mark Wood’s pace is recalled and the left-arm spinner Jack Leach gets a second chance after his mauling in Brisbane. 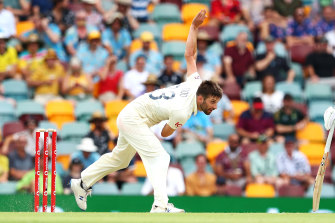 England’s quickest bowler Mark Wood is back in the side for Boxing Day. Credit:Getty

At 2-0 down in the series, England were always expected to make significant changes for the MCG, following a pair of dispiriting displays to begin the series. Their captain Joe Root made his dissatisfaction clear following the Adelaide defeat.