Racing Victoria's general manager of international and racing operations Paul Bloodworth said the German trainer would be the only international trainer in Melbourne for next month's Cup after Wohler expressed a desire to return to Australia for Ashrun's spring campaign. 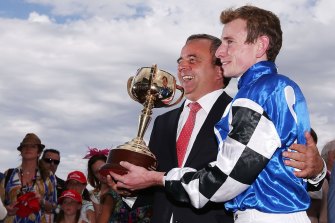 Wohler's best return in Melbourne was a Cup with Protectionist in 2014.

He is due to arrive in Sydney in mid-October and be out of quarantine by Cox Plate day. Ashrun is nominated to compete in both the Caulfield and Melbourne Cups for Australian Bloodstock, who also owned Protectionist.

"Andreas has applied for and received a travel exemption and a VISA," Bloodworth said.

"That's his plan at the moment; I spoke to him the other night and he seems pretty determined to come so it will be great to have Andreas here."

Ashrun still faces a challenge to get into the Melbourne Cup. He sits 37th in the order of entry and 43rd in the Caulfield Cup order, so would more than likely need to win a Geelong Cup or a Lexus Stakes to improve his chances of getting into the field.

But Bloodworth said Wohler's love of Australia probably played a part in the temptation to return.

"I know Andreas loves it here; he's obviously had great success and been back a few times since with horses as well," he said.

"He hasn't quite reached the heights he did in 2014 with Protectionist but he absolutely loves it here. I think he definitely thinks [Ashrun] is a chance but I also think part of it is Andreas just loves Australia so he's keen to be back a part of it." 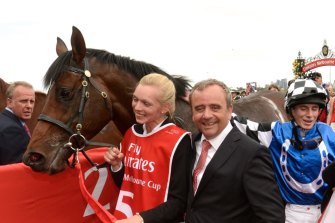 But Bloodworth said Ashrun, a lightly-raced son of Authorized, could establish himself as a competitive horse in Australia.

"He's got an undeniable chance; he's got form in a race like the Kergolay, which for a long time has been a super form race in Australia," Bloodworth said.

"I think he's right there, Ashrun, for sure."

All other international stables will be represented by staff who have already completed their quarantine periods in Sydney ahead of the shipment of 29 horses, which is due to arrive at Tullamarine at about 10pm on Friday.

Those staff have completed inductions ahead of their stay at Werribee and Bloodworth said it will be a different year at the quarantine facility.

"It'll be very low key. There'll be no access for owners or general public to the grandstand as would [normally] be the case … so there won't be any breakfast [with the stars]," he said.