Cricket Tasmania has slammed Cricket Australia for its “appalling” treatment of Tim Paine, as the fallout continues from the sexting scandal which ended the captaincy of the man hailed as the country’s sandpaper saviour.

The governing body is under fire from Paine’s state association, which has issued an extraordinary public statement condemning CA for a lack of loyalty to the former skipper, likening his treatment to that afforded to Bill Lawry. 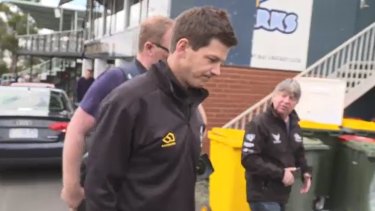 CT’s strongly worded statement echoes the sentiments of former CA chairman David Peever, who hit out at the organisation for failing to stand by Paine.

The CT board met on Monday night and “unanimously expressed its continuing support” of Paine, who stood down as captain on Friday after lewd messages and an image he sent to a former CT staffer in 2017 were made public in a News Corp report.

CT is angry Paine, who took over as captain after the ball tampering crisis in South Africa, was not shown more support.

“In conversations I have had in recent days it is clear that the anger amongst the Tasmanian cricket community and general public is palpable,” CT chairman Andrew Gaggin said. “Tim Paine has been a beacon for Australian cricket over the past four years and instrumental in salvaging the reputation of the national team after the calamity of Cape Town.

“Yet, at a time when CA should have supported Tim, he was evidently regarded as dispensable. The treatment afforded to the Australian Test captain by Cricket Australia has been appalling, and the worst since Bill Lawry over 50 years ago.”

Lawry was dismissed as captain during the 1970-71 Ashes series but was not told by selectors, learning of his fate via the media.

Paine was cleared of any breach of the code of conduct by both CT and CA in 2018. CA chair Richard Freudenstein said on the weekend his board would have sacked Paine as captain, raising further questions why it did not act before the scandal became public.

“The Cricket Tasmania Board reaffirmed its view that Paine should not have been put in a position where he felt the need to resign over an incident that was determined by an independent inquiry at the time to not be a breach of the code of conduct and was a consensual and private exchange that occurred between two mature adults and was not repeated,” Gaggin said.

Paine returned to the field in a second XI game for Tasmania on Monday, taking six catches.