Home » Tennis » A 10-point tie-breaker in lieu of a fifth set: My solution for tennis’ 4am problem

I think it’s time to consider having a look at the time-honoured, best of five sets format as we know it.

Before you scream, “sacrilege!” at the top of your voice, I’m not a fan at all of men’s singles matches being reduced to best of three sets at grand slams, so please hear me out.

Following the five-hour 45-minute marathon on Thursday night between Andy Murray and Thanasi Kokkinakis, which finished at 4.05am Friday, commentators, including many experts, are calling for broader scheduling changes in the sport. They include only one singles match at night, and even rule changes at the grand slams varying from introducing no advantage scoring, as in doubles on the tours or, deity forbid, best of three sets in men’s singles. 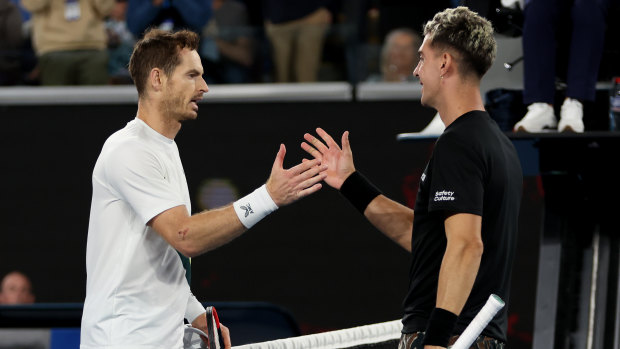 Andy Murray and Thanasi Kokkinakis embrace at the end of their five-setter after 4am local time.Credit:Getty Images

I’m not a fan of any of those, but I do think it’s time to look at options, of which there are many, especially if the grand slams can act together.

For the record, the 4.05am finish wasn’t even the latest finish at the Australian Open. That happened in 2008, when Lleyton Hewitt finally prevailed over Marcos Baghdatis at 4.34am.

Part of the problem is that ground strokes and passing-shot skills continue to improve at the same speed as technology, while volleying skills have regressed at the same rate. The inevitable consequence is that rallies are getting longer, as few dare to advance inside the service line to finish the point. That, of course, would be fixed in one fell swoop if wood racquets were reintroduced to the pro game, as occurred in Major League Baseball when aluminium bats were banned, but I don’t think we’ll live to see that.

Rallies are here to stay, and technology will advance unabated. Running out of daylight was another fix in the old days, but all the majors necessarily have night matches now, with the inherent risk of late finishes that create all manner of issues from staffing, parking and, especially, fans dealing with public transport deadlines and taxi and Uber rorting. It’s challenging.

Having once been in the scheduling hot seat as tournament director of the Australian Open, I’m fully aware of the challenges. In the early 2000s, to save some time, we introduced the 10-point match tiebreak into the mixed doubles in lieu of a third set (it’s still the format), at the time needing the ITF rules committee to approve it as legitimate, which they did.

Shortly after, ATP and WTA introduced it in all tour doubles matches, along with “no ad”. It’s tougher to save time in a five-set match, where you’re basically looking at around five hours. However, that’s a long time for the attention span of most people, not easy for TV programming and for me, the big one, awfully difficult for the winner to back up, if he finishes post-midnight, on the very next day.

All four grand slams finish five-set matches differently, which is probably not ideal. At the Australian Open, the match tie-breaker is played at six-all in the fifth set of men’s matches. At the French Open an advantage fifth set is played. At the US Open it’s a seven-point tie-breaker at six-all in the fifth, whereas at Wimbledon, a tie-breaker is played at 12-all in the fifth set … which in my mind, quantity wise, is really six sets of tennis. So, with the caveat that decision-making power correctly belongs to the grand slams, with the greatest of respect as they are all doing amazing jobs, and stressing this is only my personal view with respect to all of the majors, and not just the Australian Open, this is what I propose:

As in most successful tweaks in any sport, there needs to be a combination of innovation and tradition. Grand slam tradition dictates that best of five sets is sacrosanct, and I agree wholeheartedly with that. So how do you retain five-set matches, yet reduce the length? In other words, can you have your cake and eat it too? Perhaps this way … by replacing the long fifth set by a 10-point match tie-breaker. The beauty of this is that, under the rules of tennis, a match tiebreaker counts as a replacement set, so it is still technically a five-set match.

Importantly, it can be argued the best of five sets tradition is preserved. It’s my personal view that if the result cannot be determined by four long sets in approximately four hours, why not throw in the mix to play a match tie-breaker at two sets all, with it all on the line? It’s easier to schedule, it’s dramatic and TV friendly and, importantly, helps the winner regroup for the next match. Ideally, one day, at all the majors, in unison.

Just an idea. I’m a big fan of retaining best of five sets at the grand slams, but maybe not five sets as we know it.

Paul McNamee is a former Australian Davis Cup player and doubles champion who was tournament director of the Australian Open from 1995 until 2006.