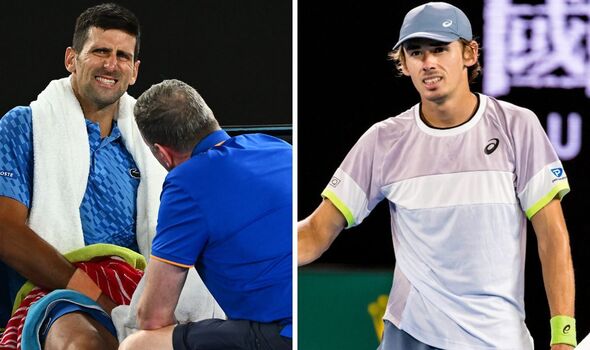 Alex de Minaur appeared to raise some suspicions about Novak Djokovic’s hamstring injury after the fourth seed downed him 6-2 6-1 6-2 in their Australian Open fourth-round tie. It was their first meeting on the tour, and the Aussie has since claimed that Djokovic was moving fine while saying the Serb’s hamstring “looked good” in his eyes.

De Minaur was thrashed in his first-ever meeting with Djokovic as the world No 5 dropped just five games en route to the Australian Open quarter-final while carrying a hamstring injury that he picked up during his Adelaide semi-final match two weeks ago. After requiring multiple medical timeouts in his first three rounds, the 35-year-old looked sublime against the 22nd seed and De Minaur appeared to question the severity of the issue afterwards.

The 23-year-old was full of praise for Djokovic’s performance during his post-match press conference, prompting a report to ask whether it made “all the speculation about the hamstring frustrating” as his opponent. De Minaur played coy, responding: “I don’t know. You tell me how you thought he looked out there. Playing him, I thought he was moving pretty well, so… I don’t know.”

But he appeared to double-down on his question over the fourth seed’s hamstring as he was then asked whether it was tough to forget all of the speculation about Djokovic’s injury when going into a match against the man himself. “Look, I don’t know,” he said.

“I think everyone’s kind of seeing what’s been happening over the couple weeks. It’s the only thing everyone’s been talking about,” he added, before making a dubious comment about how Djokovic’s hamstring appeared to him.

“Today I was out there on court against him. Either I’m not a good enough tennis player to expose that, or… it looked good to me. He was just too good in all aspects,” De Minaur said. The Australian did praise Djokovic’s performance too, admitting that he thought the 35-year-old would be able to win a record 10th Aussie Open crowd if he kept up the same form.

Asked whether he had ever faced a better player following his first meeting with the former world No 1, De Minaur responded: “I don’t think I have, if I’m completely honest. I think what I experienced today was probably Novak very close to his best, I would say. To me, if that’s the level, I think he’s definitely the guy that’s going to take the title.

“I think what makes Novak Novak, at the end of the day, how solid he is, his movement, his end range gets, what he’s able to do with that, the depth he’s able to keep. It just felt like constant pressure today. Every service game I had, wasn’t getting free points. It felt like an uphill battle from the start. Never really was able to get my teeth into the match, make it tough for him, or bring the pressure moments and situations.”