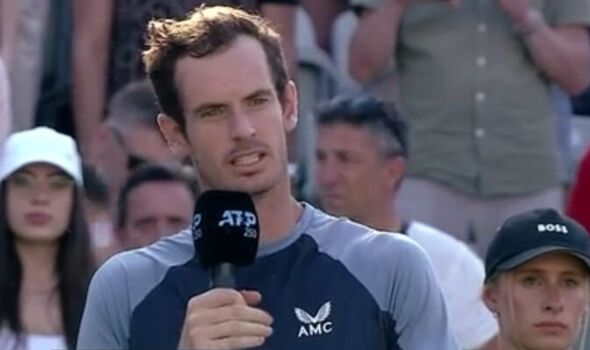 Andy Murray has suggested he has no concerns over the injury he twice required treatment for in his Stuttgart Open final defeat to Matteo Berrettini and says he feels “a lot better” about his game ahead of Wimbledon. In Germany this week, Murray reached his first grass-court singles final since 2016, when he won Wimbledon for the second time.

The Briton was ultimately beaten 6-4, 5-7, 6-3 by Berrettini, who also won the same tournament back in 2019. Murray twice needed medical attention from his physio on an apparent hip/groin injury in the third set but did not seem too worried about the problem post-match.

Addressing the fans at Tennis Club Weissenhof, Murray vowed that he has made “a lot of progress” with his tennis ahead of Wimbledon, which begins June 27. And the two-time SW19 champion appeared to hint he will be perfectly fine to compete at his home Grand Slam. He is also scheduled to play at Queen’s on Tuesday.

Murray said: “Hi everyone, thank you! It’s been an incredible week here. It’s my first time at the tournament and I really enjoyed it. The team here did a fantastic job looking after all of the players and put on a great event. The fans, the whole week, were brilliant.

MURRAY VS BERRETTINI: HOW THE MATCH PANNED OUT

“We had great support during most of the matches and a fantastic atmosphere over the weekend. So thank you so much to all of you who came out to support us the last few days. It was really, really nice. Thank you.

“I’d like to congratulate Matteo and his team on a fantastic week. As you heard he’s just come back from a surgery and it’s never easy. He played extremely well today and deserved the win. All the best the next few weeks in the build-up to Wimbledon.

“And finally thank you to my own team here, to Shane [Annun] and Mark [Hilton] and my team back home watching and my family. Thank you so much for all the support this week. Sorry I couldn’t get over the line today.

“But there’s been a lot of progress the last few weeks and I’m looking forward to what the future has to hold. I’m feeling a lot better about my game. Hopefully my body can hold up a little while longer so I can keep playing matches like this! Thanks guys, really appreciate it and I hope I can see you all again in the future.”

Winner Berrettini saluted Murray for his efforts, with the Scot playing out the full match despite being in clear discomfort and struggling to serve at full power towards the end of the deciding set. The Italian said: “Congrats to Andy for the great tournament. This is not the way we wanted to finish the match.

“Of course he’s hurt, you can see it. I’m sorry for him. But he showed us so many times how to come back. I think I even learned a little bit for him, what he achieved in his career. For me it’s an honour to play against him in this kind of court.”

Miami king Carlos Alcaraz is living up to all the hype