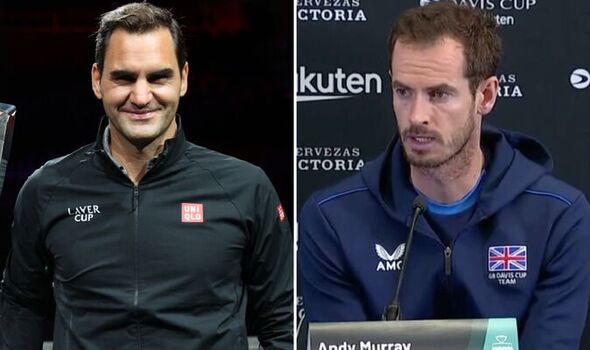 Andy Murray hopes to share the court with Roger Federer one last time at the Laver Cup, and paid tribute to the “incredible” achievements of the Swiss icon, as well as rivals Rafael Nadal and Novak Djokovic. Federer will call time on a 24-year ATP Tour career which has spanned over 1,500 singles matches and 103 title triumphs at the O2 in London next week.

The 41-year-old, a 20-time Grand Slam champion, will end his legendary professional career at the tournament he helped invent in the English capital. He will be joined by Murray, Nadal, and Djokovic for Team Europe against Team World.

Murray – who faced Federer 25 times having won 11 of those meetings including the London 2012 Olympic gold medal match – would love to play alongside the Swiss icon once more. Speaking after GB crashed out of the Davis Cup, the Briton, 35, said: “Obviously he was an amazing player.

“I was lucky to get to compete against him in some of the biggest matches, in the biggest tournaments, on the biggest stages in our sport. At the time I probably didn’t appreciate it as much but now, looking back, it’s pretty amazing.

“It’s incredible what he achieved and also what Rafa [Nadal] and Novak [Djokovic] have done, as well. It’s a sad, sad day for the sport. Unbelievable career, the longevity that he’s had. 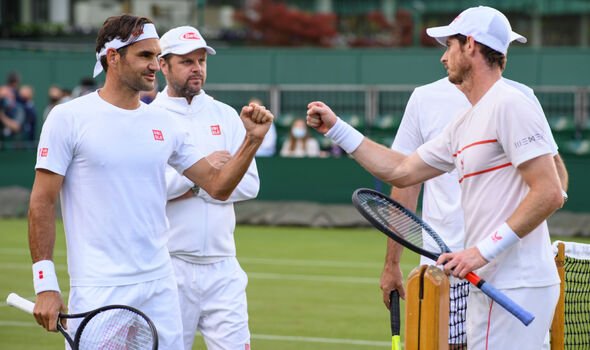 “What he did [at the 2017] Australian Open when he came back from the knee surgery and stuff was incredible. The way that he played the game, conducted himself and all of those things, I think all of the players respected him for that.

“I’ll speak more on it I’m sure in the coming week with Laver Cup. I don’t know how much he will be able to play. I haven’t spoken to him about that. Maybe I get the opportunity to share a court with him in doubles or something like that. That would be really special.”

Nadal and Djokovic have also paid classy tributes to long-time rival Federer. Nadal, who is now on two Slams more than Federer having chased the Swiss’ tally of 20 for much of his career, said: “Dear Roger, my friend and rival. I wish this day would have never come…

“It’s a sad day for me personally and for sports people around the world. I said it to you when we spoke and now it’s here. It’s been a pleasure but also an honour and privilege to share all these years with you, living so many amazing moments on and off the court.

“We will have many more moments to share together in the future, there are still lots of things to do together, we know that. For now, I truly wish you all the happiness with your wife, Mirka, your kids, your family and enjoy what’s ahead of you. I’ll see you in London at the @lavercup.”

Federer responded: “Thanks for the nice words, Rafa.” While Djokovic posted: “Roger it’s hard to see this day and put into words all that we’ve shared in this sport together. Over a decade of incredible moments and battles to think back on.

“Your career has set the tone for what it means to achieve excellence and lead with integrity and poise. It’s an honour to know you on and off court, and for many more years to come. I know that this new chapter will hold amazing things for you, Mirka, the kids, all your loved ones.

“And Roger fans still have a lot to look forward to. From our family to yours, we wish you much joy, health, and prosperity in the future. Looking forward to celebrating your achievements and seeing you in London.”