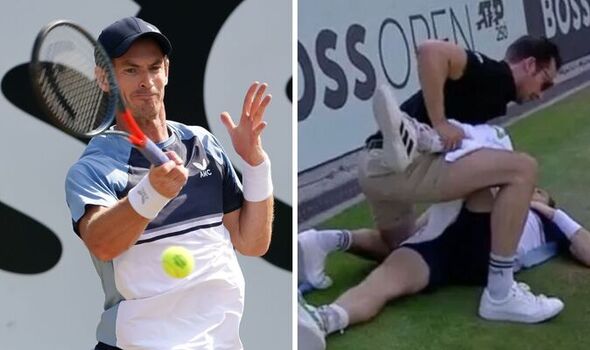 Andy Murray has been forced out of the cinch Championships at Queen’s Club with the abdominal strain he suffered in Germany yesterday. But the Scot is still hopeful he will be fit for Wimbledon on June 27.

The former world No.1 underwent a scan in London this afternoon on his return from Stuttgart. The strain is not severe but he has decided to rest this week to increase his chances of being fit for his home Grand Slam.

Murray, 35, will not play the ATP Tour event at Eastbourne next week but he could play an exhibition match at Hurlingham to test his fitness.

The three-time Grand Slam winner twice needed on-court treatment during the final of the Boss Open yesterday as he went down in three sets to Italian Matteo Berrettini. He had skipped the French Open to prepare for grass and reached the semi-final of the Surbiton Challenger.

Murray has won the title at Queen’s Club on five times and won the doubles title here in 2019 with Feliciano Lopez. Both Murray and Emma Raducanu have suffered injuries in the build-up to Wimbledon.

British No.2 Dan Evans said: It’s never easy for people to be injured, especially this time of year. It’s not ideal. In Andy’s case, I don’t know what the deal is, but if anybody knows how to prepare himself for Wimbledon, it’s him. I don’t think if he’s play this week or next week, in my opinion it wouldn’t matter for his preparations as long as he can prepare. If he can still play tennis in a week or so, I think he’ll be okay. So in that sense, it’s not ideal, but it’s not the end of the world for him. In Emma’s case, I’ve no idea what the issue is. Obviously she’s had a few injuries but I’m sure she’s dealing with that in her own way and will be fit hopefully. I think I read she will be.”

Andy Murray said: “After having a scan this afternoon, an abdominal injury means I won’t be fit to compete at Queen’s this year. The tournament means a lot to me, and it’s disappointing not to compete, especially after playing some good matches on the grass already.”

cinch Championships Tournament Director Luiz Carvalho said: “Obviously it’s extremely sad that Andy won’t be able to play here this year. Everyone at the cinch Championships wishes him a speedy recovery. We look forward to welcoming him back next year.”