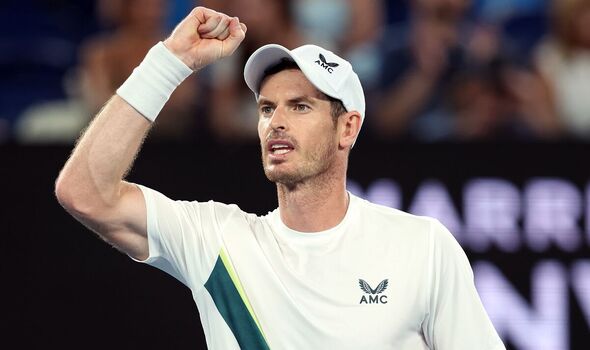 Andy Murray recorded his best Grand Slam win with a metal hip in his first ever fifth-set tiebreak after a white-knuckle rollercoaster ride against Matteo Berrettini at the Australian Open.  The Scot, 35, turned back the clock against the former Wimbledon finalist to go two sets up under the roof in the Rod Laver Arena.

And the former world No.1 had two break points to go a break up in the third set and was then two points from victory in the fourth-set tiebreak. But the former Wimbeldon finalist then staged a remarkable comeback to win the next two sets and Murray had to save a match point at the end of the fifth set. And after play on the outside courts was suspended because of extreme heat, Murray kept his cool in a decisive tiebreak to triumph 6-3 6-3 4-6 7-6 7-6 in four hours and 49 minutes.

Murray’s last win over a top 20 player at a Grand Slam was against world No.9 Kei Nishikori at the 2017 French Open before he suffered his hip injury and underwent two surgeries. The five-time finalist here also gained revenge for his third round defeat to Berrettini at the US Open.

The world No.49 will now face the winner of the match between Thanasi Kokkinakis and another Italian Fabio Fognini in the next round. He is seeking to get beyond the third round of a Grand Slam since Wimbledon in 2017.

But Berrettini, who will now slip outside the world’s top 20, is the latest victim of the Netflix curse with other stars like Nick Kyrgios, Ajla Tomljanovic and Paula Baudosa pulling out injured before the start.

Murray gave a vintage display against Berrettini early in the match to tame the danger of the Italian’s big serve and forehand. He stood way behind the baseline to receive even second serve – and moved his opponent across the court and attacked his weaker backhand. The Scot broke the Italian in his first service game after chasing down a drop shot and took his first set point with an ace after 43 minutes.

JUST IN: Australian Open bans all Russian flags while play stopped for hours

It was a similar story in the second set when Murray broke in the first game with a stunning running backhand cross-court pass. Channel 9 commentator Jim Courier said: “Andy Murray has come out like a house on fire.” He won his first set point following a drop shot which the Italian could only flick into the net.

The three-time Grand Slam champion came into the match with an incredible record of winning 158 out of 159 of his five-set matches from one set up. The exception was in his first Wimbledon against David Nalbandian in 2005. But that record looked in danger after the third set. Murray saved a break point in the third game – the first he had faced since the seventh game of the first set.

At 2-1 the Scot had two golden chances to break and take an iron grip on the match but Berrettini saved both with big serves.
Then, as so often happens in tennis, Berrettini broke for the first time in the next game to go 4-2 up when Murray pulled a forehand into the tramlines. The Scot’s service action was interrupted by a crying baby and a shout from the crowd.

The Italian served out the set but the fourth set went to a tiebreak. Berrettini seemed to take a crucial advantage when he won a 24-shot rally when Murray hooked a backhand wide to go 5-4 up. Then at 6-6. Berrettini came up with a brilliant backhand pass which Murray could only volley over the baseline. And he took his third set point at 8-7 when the Scot pushed a flat forehand return over the baseline after three hours and 34 minutes.

Murray escaped from a first matchpoint at 4-5 when Berrettini hit a horrible backhand into bottom half of the net following a poor drop shot from the Scot. In the 11th game, he showed his commitment to the cause by nearly decapitating himself on the umpire’s chase chasing a Berrettini drop shot. “It could not be more dangerous being there,” he said.

In the tiebreak, Murray raced into a 4-0 lead and led 8-3. And he took his first match point with a net cord winner on a service return. It was Murray’s second longest match at the Australian Open. He lost to Novak Djokovic in the 2012 semi-final in four hours and 50 minutes.

'They were lying' – Medvedev blasts Nadal, Djokovic and Federer claim