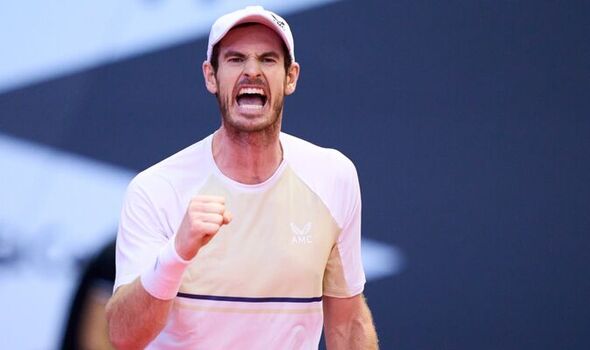 Andy Murray came from a set down and a break down in the final set to advance to the second round of the Swiss Indoors on Tuesday as he defeated Roman Safiullin 6-7(5) 6-3 6-4. The world No 49 was playing his first match in Basel since 2005, and got off to a winning start after a last-minute change of opponent when Sebastian Korda withdrew and was replaced by the qualifier.

Murray and Safiullin took to Centre Court in Basel for the first singles match of the day on Tuesday. The pair had never met on the ATP Tour but the 25-year-old got the better of the former world No 1 during their Rennes Challenger match last year, winning 6-2 4-6 6-1 at another indoor hard event.

They quickly found themselves embroiled in a tight first-set battle after the Russian broke to love in the fourth game before the three-time Major winner quickly broke back. The opener went to a tiebreak with Murray taking an early mini-break lead at 3-1 but it was the main draw debutant in Basel who roared back to take it 7-6(5) in 55 minutes after the Brit could be heard shouting in frustration when he hit the ball out to gift his opponent a set point.

Despite losing the opener, Murray hit just two unforced errors though the world No 93 fired an impressive 23 winners. And the 35-year-old continued to struggle at the beginning of the second, finding himself embroiled in a seven-minute, three-deuce game after leading 40-0.

JUST IN: John McEnroe says Nick Kyrgios ‘gets sidetracked by anxiety and fear’

It was another marathon service game for Murray as he fended off five break points to hold after 13 minutes in a crazy final rally before he finally got a much-needed quick service game as he held to love to lead 3-2. Momentum then finally started to shift his way as he was the first to break in the second set, taking a 4-2 lead before serving it out 6-3.

It was Safiullin who pounced first in the decider, breaking the world No 49’s serve on his fourth break point chance to take a 3-1 lead. The world No 93 edged closer to a second career victory over Murray as he then held from deuce to come within two games of the match at 4-1.

With the former world No 1 staring down the barrel of defeat, he was able to break and get back on serve at 3-4, then holding for 4-4 as he copied the Russian in winning three games on the bounce. Having lost his lead, Safiullin began to feel the pressure as he began spraying errors and went 0-40 down, saving the first two break points but losing the third to allow Murray to serve for the match at 5-4.

He served out a three-set comeback victory 6-7(5) 6-3 6-4 in two hours and 38 minutes and will next face the winner of a clash between sixth seed Roberto Bautista Agut and qualifier Laslo Djere, likely being played on Thursday.

Murray has made no secret of the fact that he is aiming to boost his ranking from No 49 into the top 32 so he can be seeded for January’s Australian Open. After Basel, he has just one tournament left for the season at the Paris Masters 1000. Murray earned direct entry into the final event of 2022 off the back of several withdrawals from top players like Alexander Zverev and Nick Kyrgios, who are injured.