When Annabel Ellwood played Serena Williams in 1998 she realised the then 16-year-old was the future of the sport.

It was 1998 at The Greens Country Club in Oklahoma when Ellwood, then 20, became the first Australian to play Williams in a WTA tournament.

Because Serena and her elder sister Venus never played junior events, Ellwood had caught only glimpses of her opponent in action.

“I distinctly remember the beginning of the match, when you put your bag down and come out to where the umpire is to do the coin toss,” Ellwood said. “I remember her looking down on me. It was like an intimidation factor. Normally the player stands still and they’re focused on themselves. But she paced and she really looked me in the eye.”

Ellwood, who was Australia’s top-ranked women’s player in 1997, initially wasn’t fazed by her opponent’s pre-match posturing. 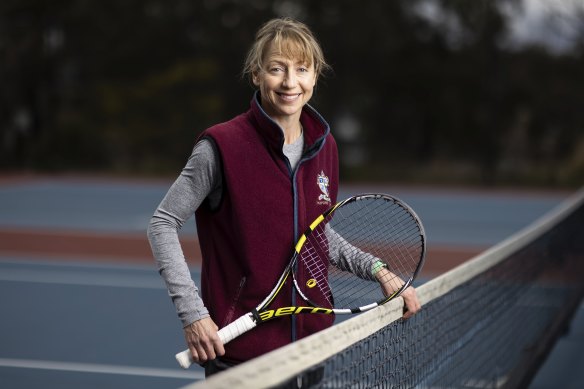 Annabel Ellwood at her coaching job in Canberra.Credit:Alex Ellinghausen

“I knew she was going to be good but I think there was always a bit of scepticism because [Serena and Venus] hadn’t played any junior events.”

She found out how good Serena was pretty quickly as she defeated Ellwood 6-0, 6-2.

“Perhaps she did intimidate me,” Ellwood said, as she reflected on her performance. “She hit the ball big. She had a lot of power. I knew this was the future of the game.” 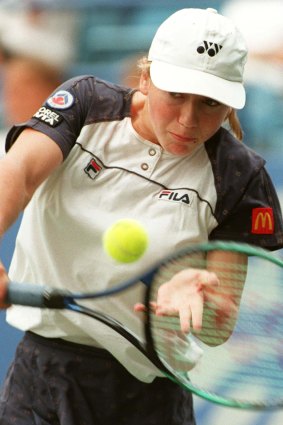 Ellwood in action against Jennifer Capriati at the US Open in 1996. Ellwood defeated Capriati 6-4, 6-4.Credit:AP

Ellwood said Williams had changed the style of play.

“Now, everyone is playing more like her, more aggressive,” she said. “When they’re under pressure, when it’s time to step up, they can all just whack it.

“Twenty years ago, you could play it safe and still win some matches; now you can’t. [Williams] highlighted that you have to be aggressive to win; you have to take chances. I think she will be remembered as the greatest of all time.”

Ellwood didn’t have a lot of interaction with the Williams sisters, but said her mother remarked on how nice Serena was.

“The one time that I brought my mum with me, Serena spoke more to her than to me,” she said. “In the initial stages, [the Williams sisters] sort of kept to themselves a bit because I think they might have felt like outsiders, as in everyone wanted them to fail.

“Later on, they came out of their shell a bit as they went on tour more and more.”

Ellwood had a six-year career on the WTA tour and reached a career-high world ranking of 57. She competed in seven Australian Opens between 1995 and 2001, reaching the third round of the tournament in 1998. After winning nine International Tennis Federation singles titles and 14 doubles titles, she retired in 2002.

Ellwood said the Williams sisters challenged the stereotype of people who were successful in tennis. 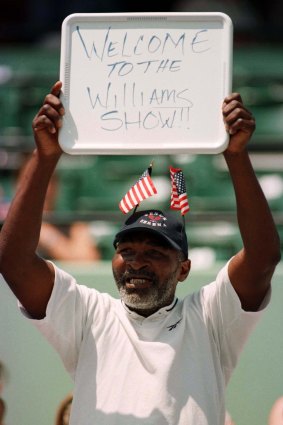 Richard Williams, father of Venus and Serena, at a match in 1999.Credit:Reuters

“Back then, it was the typical white skirts and [players] from privileged backgrounds, particularly in America,” she said. “[Serena Williams] has given confidence to girls and women of colour.”

The path the Williamses took in their early years, going straight from practice onto the tour, was unusual according to Ellwood.

“I don’t think anyone’s ever done it since,” she said. “I felt like you needed to get matches to get the confidence, but they just went out and won. I think [Serena] felt like it was her destiny to be that good.”

Williams’ mother, Oracene Price, may have been at the match her daughter played against Ellwood, but Williams’ father, Richard Williams, definitely wasn’t.

“You always knew the dad was there because he always used placards and stuff,” she said. “It was almost over the top with his eccentricity.”

However, it was obvious to her that Williams had strong support from her family. “I think that’s really important as a travelling professional player,” she said. “I think [Williams] has been able to stand up under all that pressure for decades because she’s had a good balance with her family.”

Ellwood said Williams’ competitive nature was apparent from their first match and was a constant during her career.

“[Williams] hates losing a point,” Ellwood said. “She’s got a desperation when she’s on the court to get to the ball. She’s super competitive. I’m sure if you played a game of Uno with her, she would want to win.

“What she had mentally was unbelievable. Whereas you could see where Venus did get nervous and her forehand broke down a bit, Serena never faltered with that. Serena never doubted herself.”

Ellwood said Williams was also able to separate her time on the court from post-game time.

“She’s a good sport,” Ellwood said. “She does everything she can on court to win, and then at the end of the game, well, that’s it.”

And Ellwood thinks that mental fortitude has benefited other areas of Williams’ life, too.

“Williams was massive, not just in the sport,” she said. “She’s been able to show you can achieve more than one thing. In all her pursuits, with her clothing line, her businesses and all her matches, there hasn’t been any doubt. She just goes and does it.”

While Ellwood was sad to hear of Williams’ retirement, she said the multiple grand slam champion had handled an immense amount of pressure for decades.

“It’s a tough gig to do, I don’t think the general public understand the amount of pressure that she’s under,” Ellwood said. “There’s not many that have been able to do what she’s been able to do, and do it so well, so it’s admirable, really.”

Nearly 25 years after playing the grand slam champion, Ellwood is still involved in the sport and enjoys reading about women in tennis, although she no longer checks for their running times. Today, she coaches tennis at Radford College in Canberra.

“I’m still heavily involved in tennis,” she said. “It hasn’t really ever left me.”

Watch all the action from the US Open ad-free, live & on demand on Stan Sport, with centre court matches streaming in 4K UHD from Tuesday 1am AEST.