New York: A small Australian contingent will fancy their first-round chances after the draw for the coronavirus-affected US Open was unveiled.

Top seed Novak Djokovic was handed a comfortable-looking draw on Thursday as he bids for a fourth US Open title but Serena Williams could face danger early on as the American prepares for another attempt to win a 24th major singles crown. 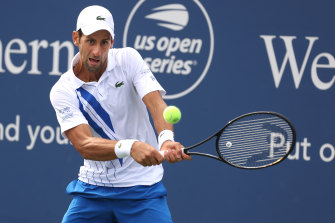 World No.1 Novak Djokovic will fancy his chances of winning a fourth US Open crown in the absence of Roger Federer and Rafael Nadal.Credit:Getty

Six Australian men will take the court in front of empty stands at Flushing Meadows, headed by Alex de Minaur and John Millman, with only the latter drawn against a seed – Georgia's No.22 seed Nikoloz Basilashvili.

De Minaur, himself the 21st seed, will open his campaign against Andrej Martin of Slovakia, while Marc Polmans kicks off against American Marcos Giron. Christopher O'Connell gets under way against Laslo Dere of Serbia, James Duckworth will face Italy's Salvatore Caruso and in another Australia-Italy showdown Jordan Thompson takes on Stefano Travaglia.

World No.1 Djokovic will play Bosnia's Damir Dzumhur in his opening match.

The earliest seed he could meet would be a possible third-round clash with No.28 Jan-Lennard Struff who he beat easily at the Western and Southern Open in New York this week. 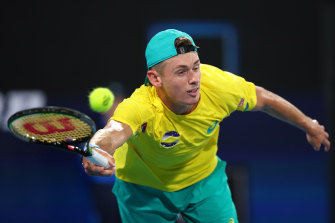 Alex de Minaur is the 21st seed at Flushing Meadows.Credit:Getty

Williams, seeded third, plays compatriot Kristie Ahn in round one but a meeting with 2017 US Open champion Sloane Stephens, seeded 26th, is likely in round three.

Williams, bidding to win her home slam for a seventh time, is also chasing a record-equalling 24th grand slam title having lost her last four major finals, including the past two years in New York.

Serbian Djokovic, who tested positive for COVID-19 after an exhibition event he organised in Croatia this year, is seeking an 18th grand slam title which would leave him just one behind Nadal and two short of Roger Federer who is out injured.

The highest seed he could face before the quarter-finals is No.16 John Isner in round four.

Djokovic has a perfect record this year, winning all 21 matches he has played.

Last year's runner-up Daniil Medvedev is seeded third and plays Argentina's Federico Delbonis in round one.

Fourth seed Stefanos Tsitsipas is up against Spain's Albert Ramos-Vinolas in but another young gun, fifth seed Alexander Zverev, has been handed a tough first hurdle with a match-up against big-serving Kevin Anderson who reached the final in 2017 and the Wimbledon final in 2018.

Former champion Andy Murray, given a wildcard as he continues to climb back from two hip surgeries, will face Japan's Yoshihito Nishioka in his first grand slam singles match since the 2019 Australian Open. 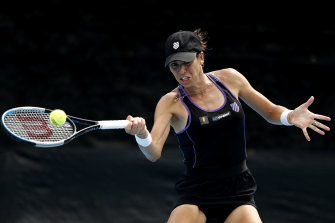 Australia’s Ajla Tomljanovic has a tough opening match at the US Open.Credit:Getty

With six of the women's top 10 skipping the tournament, including Australia's world No.1 Ashleigh Barty, the Czech Republic's Karolina Pliskova is top seed and she begins her quest for her first grand slam title against Ukraine's Anhelina Kalinina.

Serena's unseeded sister Venus, playing in her 22nd US Open at the age of 40, takes on 20th seed Karolina Muchova.