Third seed Dominic Thiem is out of the Australian Open after a straight-sets defeat to a resurgent Grigor Dimitrov in the fourth round.

The third seed and US Open champion battled back from two sets down to beat Nick Kyrgios on Friday but appeared devoid of energy in a 6-4 6-4 6-0 defeat on Sunday.

Dimitrov will face Russian qualifier Aslan Karatsev, who came from two sets down to beat Canadian 20th seed Felix Auger-Aliassime and reach the last eight on his Grand Slam debut.

Thiem, last year’s finalist, took an early 3-1 lead in the opening two sets only for 18th seed Dimitrov to charge back at him and clinch both.

Dimitrov eased through the third set, breaking his out-of-sorts Austrian opponent seven times in total during the match before a subdued celebration from the Bulgarian.

Earlier, Auger-Aliassime appeared set to register a routine victory after winning the first two sets, but world No 114 Karatsev rallied to record a 3-6 1-6 6-3 6-3 6-4 victory and continue his impressive run at Melbourne Park.

Karatsev, who knocked out eighth seed Diego Schwartzman in the third round, is just the seventh man in the Open Era to reach the last eight on his Grand Slam debut and the first since Alex Radulescu at Wimbledon in 1996.

FROM QUALIFYING TO QUARTER-FINALS 🙌

“It was really difficult in the beginning to play with him. He’s a really good player and was playing really fast and it took me two sets to find my rhythm,” said Karatsev.

“I put everything into this match and I’m really happy.”

Karatsev, one of three Russians alongside Daniil Medvedev and Andrey Rublev who reached the last 16 this year, had failed on nine previous occasions to qualify for the main draw of a Grand Slam. 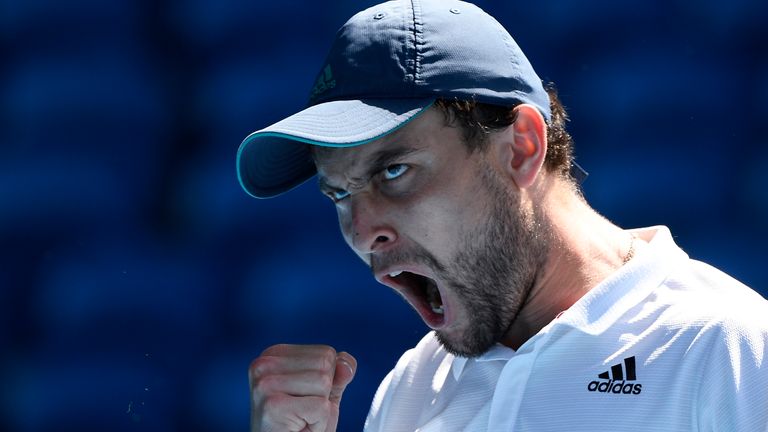 The 27-year-old proved the more consistent in the first five-setter of his career as the unforced errors mounted for the 20-year-old Auger-Aliassime, who was also bidding to reach the last eight at a Grand Slam for the first time.

Karatsev is also the lowest-ranked man to reach the Australian Open quarter-finals since Patrick McEnroe did so in 1991, also as world No 114.

Meanwhile, Briton Neal Skupski partnered Slovenia’s Andreja Klepac to beat Australian duo John Peers and Belinda Woolcock 6-2 5-7 (12-10) in a match tie-break in the first round of the mixed doubles.