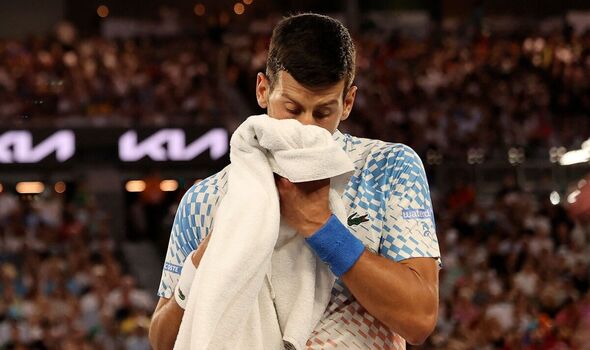 Novak Djokovic’s win over Alex de Minaur in the fourth round of the Australian Open was marred by an insulting chant towards the Serbian towards the end of the match. Djokovic was cruising to victory against De Minaur when he suffered his first blip of the match midway through the third set.

The nine-time champion hit back-to-back double faults with a heckler then heard shouting “No vax, Novak”. Eurosport commentator Chris Bradnam couldn’t believe that the spectator had not been kicked out of the Rod Laver Arena.

“How’s he not been thrown out yet?” Bradnam said. “Wouldn’t happen at Wimbledon.”

He added: “To try and get under his skin with ‘no vax, Novak’ – he has very good reasons, his own personal reasons for not getting vaccinated if you go back 12 months and the Australian government had their reason for not allowing him to play.

“It’s just so cheap.” Tim Henman agreed with his co-commentator, but insisted it’s up to Djokovic to not let “a couple of idiots distract you”.

The disruptions continued just a few games later with Djokovic having to stop and recompose himself on the baseline. “The problem is with these people in the crowd, they get in the newspapers the following day,” Bradnam continued.

“I think that’s their mission when they come.” Chair umpire Mohamed Lahyani then tried to address the noise from the crowd, urging them to be quiet when the player is about to start their serving motion.

“They shouldn’t be in the crowd Mr Lahyani,” Bradnam added further. “They should have been removed already. Something they need to really work on here.”

The disruptions continued with more and more people beginning to shout out in between points as both players prepared to begin their serve. Lahyani tried to silence the crowd on occasions before raising his hand and saying: “Enough with those kinds of comments.”