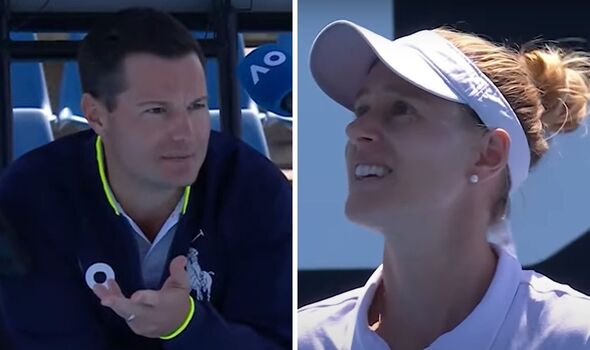 Alison Riske-Amritraj exploded into a temper tantrum during her doubles match for having a point taken away by the chair umpire after apologising for smashing a ball at her opponent. Doubles matches at the Australian Open have just gotten underway with the duo of Coco Gauff and Jessica Pegula strong favourites to win the title.

But the main attention in the doubles matches on Friday morning was drawn to the 1573 Arena for Riske-Amritraj and Linda Fruhvirtova’s match against Natela Dzalamidze and Alexandra Panova. Riske-Amritraj and Fruhvirtova had just lost the opening set tiebreak 7-4, and were in some trouble after going a break down in the second set.

Dzalamidze and Panova were looking to consolidate their break in the fifth game with the tie finely balanced at deuce. But there was a contentious moment at a key point of the match when Riske-Amritraj smashed a ball at her opponent close at the net before quickly apologising.

The American could be heard saying “sorry” soon after the ball hit her opponent, although it was her belief they had won the point fair and square as Dzalamidze and Panova were unable to return the ball. However, chair umpire Nico Helwerth angered Riske-Amritraj and Fruhvirtova when he made reference to the controversial hindrance rule.

“Ladies and gentlemen due to the hindrance Ms Riske-Amritraj has created, the point goes to Dzalamidze/Panova,” said Helwerth. According to the ITF law book, the hindrance rule can be called when a player is obstructed in a deliberate way by the opponent whether it be unintentional or not, and the umpire appeared to suggest the American apologised while the point was still being played, although replays indicated she said it afterwards.

Riske-Amritraj and Fruhvirtova reacted in fury to the ruling with both quickly going over to the chair umpire to plead their case. “That’s the rule,” he added.

“She said ‘sorry’ while the ball is in play. I know she doesn’t do it on purpose, but that’s not the point.” Fruhvitova began arguing with the umpire before Riske-Amritraj asked to speak with the match supervisor.

“What the hell is he doing up there then? That’s f***ing ridiculous,” Riske-Amritraj said. “No, no, that’s ridiculous. Is he sleeping? Dude. I wouldn’t say sorry [before the point is complete].