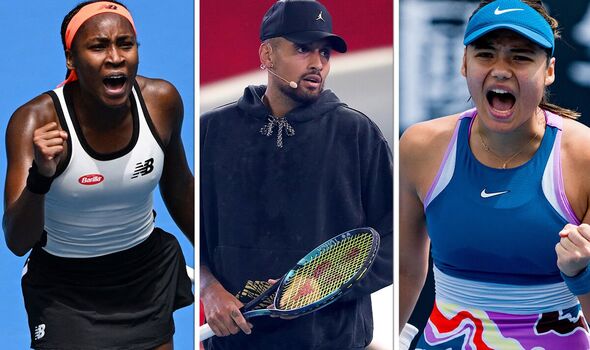 Emma Raducanu proved her fitness with an opening win but Nick Kyrgios pulled out injured on a dramatic opening day at the Australian Open. Kyle Edmund is the first British player to get beaten while a female seed went out in tears. And world No.3 Jessica Pegula, one of the favourites for the women’s title, won easier than her Buffalo Bills.

The former US Open champion set up a glamorous second round clash with Coco Gauff by beating German Tamara Korpatsch 6-3 6-2 in only 85 minutes.

The British No.1 rolled her left ankle at the ASB Classic in Auckland earlier this month but has also won her race to get fit.

“I’m obviously really happy to be through to the second round,” she said. “It was always going to be difficult coming in with so little prep and being out there. But I’m just really happy to have come through that.

“Everything I’ve done has been quite controlled the last week. So to test it out in a real match and with the unpredictability and stuff, iit felt good.”

World No.7 Coco Gauff promises a tougher challenge in the next round after the French Open finalist beat Czech Katerina Siniakova 6-1 6-4 in the opening match in the Rod Laver Arena.

Gauff and Raducanu have never played each other. I think it will be a good matchup for both of us,” said the American. “I’m excited.”

By contrast, home favourite Nick Kyrgios was left “devastated” after pulling out as the curse of the new Netflix series claimed another victim.

The Aussie No.1, who will need minor surgery to remove a cyst from his left knee, said: “I’m devastated, obviously, it’s my home Slam and going into this event as one of the favourites, it’s brutal. Bad timing. Injuries are part of the sport.”

It is another huge blow for the first Grand Slam season where 2022 champion Ash Barty is not defending her title after retiring last March while Serena Williams and Roger Federer have also ended their careers.

And Kyrgios is the latest star of the fly-on-the-wall Break Point to pull out injured following world No.1 Carlos Alcaraz, Ajla Tomljanovic and Paula Baudosa

The Wimbledon finalist had to pull out of warm-up events because of the knee injury and used an exhibition match against Novak Djokovic at Melbourne Park on Friday night as a fitness test.

But in an emotional press conference today, world No.21 Kyrgios said: “I wanted to give myself hope, I thought I had a chance. It doesn’t feel good.”

The Aussie No.1 had been in the news on the opening day of his home Grand Slam even before calling his afternoon press conference to pull out.

A picture of Kyrgios and his girlfriend Costeen Hatzi riding in central Melbourne on an e-scooter without wearing helmets has caused a social media storm. Victoria road rules state helmets must be worn but the helmet is seen attached to the scooter.

Emma Raducanu won praise on social media for a new Nike skirt inspired by Aboriginal art. But Frances Tiafoe’s outfit – which had a matching patterned shirt and shorts – was less easy on the eye.

The former British No.1 reached the semi-finals here in 2018 but has since undergone three knee operations and is back at Melbourne Park for the first time since 2019.

Down at world No.583 and playing on a protected rankings, Edmund competed in the first set but the Italian seized control at 5-4 and led 4-0 in the third set before the Yorkshireman got on the scoreboard again.

The former world No.14 saved five match points in the John Cain Arena – the third biggest court – before going down in one hour and 56 minutes.

Sinner, 21 and now coached by Aussie Darren Cahill, has reached the quarter-finals in all four Grand Slams and could go further here.

“Me and Kyle played already in Adelaide and it was a tough draw for both of us,” said the Italian.

I am very happy he is back and I wish him all the best for the rest of the season. But I think my level was very good today.”

Day of double success for Pegula.

Jessica Pegula completed the first win of the tournament in only 59 minutes after watching her Buffalo Bills secure a closer victory to reach the playoffs.

The world No.3 is the daughter of Bills owners Terry and Kim Pegula. And the American got up early to watch them win the NFL wildcard game 34-31 against Miami Dolphins before knocking out Romanian world No.161 Jaqueline Cristian 6-0 6-1 in the opening match in the Margaret Court Arena

“I woke up around 7:00 and got to basically watch most of the second half, except when I was driving here,” she said. “And then the game finished before I started my warmup, so I was out there watching. It was a tough game. Not the prettiest of wins, definitely an ugly win, I think. But same thing, it’s the first game, playoffs, everyone is kind of nervous, a lot of tension. It was fun obviously for them to get that win before I went on court. It wouldn’t have really affected me, I don’t think, but I would have just been annoyed that they lost.

“I talked to them a little bit. We have a family group chat and they’ll send updates and stuff like that. But I think everyone was like: ‘Whew, got through that one’, because they were struggling there for a bit.”

American Amanda Anisimova was the first seed knocked out of the Australian Open and the No.28 seed was in tears before the end of her 6-3 6-4 defeat to Ukrainian Marta Kostyuk

No.25 seed Marie Bouskova complained to the umpire about the noise made by Bianca Andreescu as she went out 6-2 6-4 to the former US Open winner. “I’m hitting the ball and she’s screaming,” said the Czech.

'They were lying' – Medvedev blasts Nadal, Djokovic and Federer claim