There are no Australians left in the French Open singles draw after Ash Barty’s campaign was cut short by injury and Alex De Minaur fell in four sets.

Barty could not overcome a hip injury that plagued her during her first-round win against American Bernarda Pera, and retired when trailing 6-1, 2-2 to Polish world No. 45 Magda Linette. 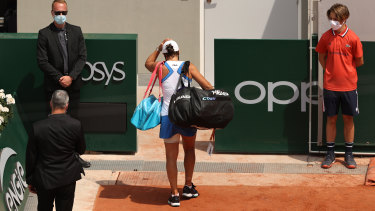 A dejected Ash Barty leaves the court after retiring hurt during her second-round match.Credit:Getty

The Australian saved three break points with strong defensive play to hold but struggled to generate anywhere near her usual amount of power or spin on serve.

By the end of her second service game, Barty had served three double-faults and was down a break. She was down two breaks a few minutes later, having made just 41 per cent of her first serves. Linette was clinical and relentless in attacking Barty’s second serve, and won the first set in 26 minutes.

Between sets, Barty called for the physiotherapist and after some on-court treatment, walked off Court Philippe Chatrier gingerly. 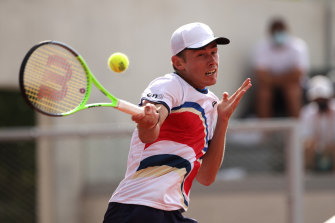 Alex De Minaur has little time to dwell on his French Open exit.Credit:Getty

The world’s top two players are now out of contention in the women’s draw. In the bottom half of the draw, world No.2 Naomi Osaka withdrew before her second-round match following a $US15,000 ($19,500) fine for failing to partake in a post-match press conference.

The absence of the world’s two best players also opens the door for Serena Williams. The player many consider the greatest of all time has not won a grand slam tournament since the Australian Open in 2017 and is currently one major short of Margaret Court’s all-time record of 24.

The 25-year-old has just over three weeks to recover from the injury – which she revealed was suffered when landing after a serve during practice at the weekend – before the grand slam on her preferred surface.

Sharma offered some resistance but was overpowered by the Tunisian in the 6-2, 6-4 defeat.