Jelena Dokic saw enough improvement in Ash Barty’s serve through her win against 2020 Australian Open champion Sofia Kenin to declare it as the new weapon that will lead her to a maiden home grand slam.

Barty breezed past Kenin – who was playing her first tournament since Wimbledon last year – 6-3, 6-4 to book her place in the Adelaide International semi-finals. 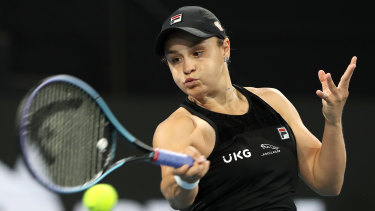 The world No. 1 will face either Victoria Azarenka or Iga Swiatek in the final four.

The result was never in any serious doubt. Barty broke Kenin early in both sets and didn’t even concede one break point on her own serve.

It was a clinical performance, even if it was aided by Kenin’s propensity for unforced errors in critical points through the match.

When it’s on song, Barty’s serve has always provided some form of threat.

But in slow, cool conditions in Adelaide, she amassed 17 aces and an incredible 31 of 32 first serve points.

The world No. 1 appears to have spent plenty of time in the preseason working on her accuracy and velocity. If those numbers are replicated at Melbourne Park, Barty will be mighty hard to beat.

“I definitely see an improvement in her serve. Going into a grand slam, to the Australian Open, this has always been a weapon and consistent, but I feel like it’s bigger now,” Dokic said during Nine’s call of the match.

“This could be the key to winning the Australian Open for Ash Barty.”

They’re words Barty would never say of herself, though she was happy with the foundation she has laid for the first major of the year.

“It felt pretty good today. I was able to look after my service games pretty well, and it was a lot of fun playing out here again,” Barty said.

“Obviously, looking at both these last two matches, there is still work to do.

“We got back to the drawing board and continue to try and do all of the right things. It’s been a really solid start, and we’re happy with the foundation we’ve set to set the year off.”

Barty has been given no easy start to her season, having already beaten Coco Gauff in her first match of the summer.

Whether she faces Azarenka or Swiatek – who have three grand slam titles between them – in the semi-finals, the task will be no easier.

“But that’s what you want,” Barty said.

“It’s nice to be out here and tested right from the start and know you have to bring your very best level.”

Kenin, meanwhile, looked a shell of the player that beat Barty on her way to the Australian Open title two years ago.

The former world No. 4 took the back half of last year off after she tested positive to COVID and endured a run of very poor results.

Now the world No. 2, Kenin will have to improve to be any hope of winning her second Australian Open later this month.

She could have a run here: Alexandra Stevenson on Coco Gauff and the Wimbledon spotlight