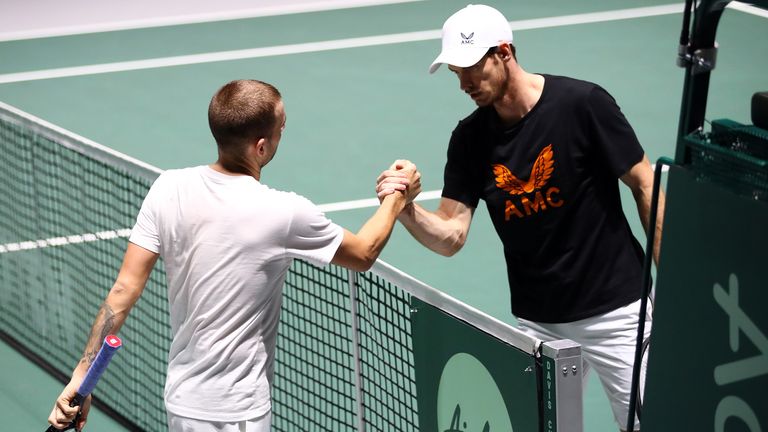 Andy Murray and Dan Evans will face off in Saturday’s Battle of the Brits semi-finals after Evans joined Kyle Edmund in recording a 100 per cent record in Roehampton.

Britain’s three leading players, including Cameron Norrie, will be joined by arguably the greatest ever produced for Saturday’s last four match-ups and the appeal of Evans against Murray holds the most allure.

Remarkably the pair have never previously met, and it is ironic that the stars align to pit them into a showdown when Evans tops the British rankings and Murray, the three-time Grand Slam champion and former world No, 1 is fourth.

Schroders Battle of the Brits – Saturday’s Order of Play

While Murray’s battle back to full fitness has been well documented, Evans has been on something of a journey himself, returning from a one-year ban after testing positive for cocaine to climb to his highest ranking and usurp Murray and Kyle Edmund as the British No 1.

Evans topped the Greg Rusedski group with wins over Jay Clarke, Norrie and Ryan Penniston while Murray won two of his three matches, only suffering defeat to Edmund to finish second in the Tim Henman Group after beating James Ward and Liam Broady.

As well as the pair’s head-to-head at the National Tennis Centre in Roehampton, Edmund and Norrie – Britain’s No 2 and 3 respectively, meet in the other semi-final before the two winners meet and the champion is crowned on Sunday.

In Friday’s action, Evans and Edmund completed the group stage with 100 per cent records. Evans saw off Peniston 6-2 3-6 10-4 while Edmund beat Liam Broady 6-3 6-3 to add to wins over Murray and Ward.

After Liverpool secured the Premier League title the previous evening, Edmund saluted the triumph by putting three Reds shirts on display at the National Tennis Centre in Roehampton, laying them across a bench by the court.

Wimbledon 2021: Novak Djokovic fights back from a set down to beat Jack Draper on Centre Court