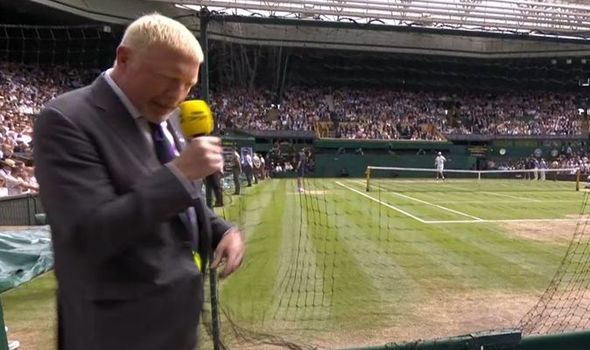 Meanwhile, Becker had joined BBC’s Sue Barker behind Djokovic’s side of the court to preview the men’s clash.

The three-time Wimbledon champion was just about to answer who he thought was going to win the title this afternoon.

But he was disrupted when a ball came flying towards him, with only the netting stopping it from hitting him.

Becker looked shock as the ball appeared to make contact with him, with a second coming down just seconds later in the same spot.

Berrettini was warming up on his serve and had clearly found his spot, with Barker and Becker able to see the funny side.

“I think that’s a 134mph serve coming our way Boris,” she said, laughing.

Becker then tried helping collect the two balls that got caught up in the net as the ballboy also came to lend a hand.

“Are you going to be ballboy out on Centre Court,” Barker asked.

The pair managed to quickly shrug off the minor disruption after the balls were cleared.

And Barker returned to her original question on who Becker was backing and what the final result would be.

“I like both players, I have to be neutral,” he said.

“But I’m a realist, I know the game a little bit, so I think Novak in four.”