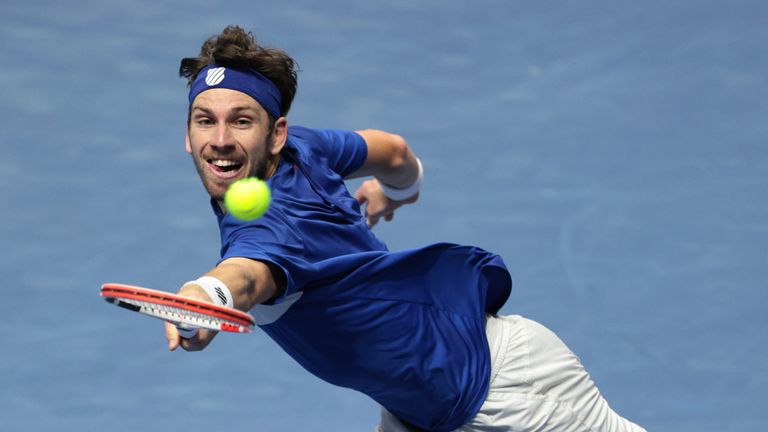 Cameron Norrie bowed out at the semi-finals of the Delray Beach Open, losing in straight sets 6-3 7-5 to American Sebastian Korda.

Norrie, who is ranked 75 in the world, was facing off against the 20-year-old for the first time and the pair duelled for an hour and 22 minutes on Tuesday.

He was attempting to reach his second ATP Tour final. However after swapping early breaks inside the first five games, Korda raised his level in the opening set and seized it 6-3.

The second set was a tighter affair, with Norrie looking to prey on potential nerves from Korda as the 20-year-old perhaps looked at the finish line too early.

At 5-4, the British No 3 showed his mettle to save two match points and level proceedings in the set. However, Korda re-grouped well and ultimately stayed calm to march over the finish line.

“I’m fired up right now, I couldn’t be happier,” Korda said on the ATP’s website.

“I warmed up with my coach, he hits the flattest ball possible, so that worked out today.

“[Norrie] has a super tricky game. His backhand cross is world-class, and his forehand once he gets it rolling across, it’s hard to defend. I’m super happy with the way I stayed aggressive and played the whole match.

“At 5-4, two match points… he played one good point but then I threw in a double fault. But other than that, I played a really good match.”

Petr and Sebastian Korda would be third father-son duo to win tour-level singles titles in Open Era after Ramanathan and Ramesh Krishnan, Phil and Taylor Den

The victory means that Korda has now reached his first ATP Tour final by winning nine matches in a row. His opponent is the fourth seed Hubert Hurkacz who prevailed over Christian Harrison 7-6 (7-4), 6-4 earlier in the day.

Hurkacz and Harrison were also meeting for the first time, with the latter enjoying an impressive run at the tournament.

Harrison is currently ranked 789 in the world and he progressed through qualifying to the semi-final stage.

His campaign turned heads for all the right reasons, but also for others too when he was fined by the ATP after refusing to take part in a mandatory on-court interview at the Delray Beach Open.

When it came to the semi-final, Hurkacz had the edge and he goes into the final contest with Korda having not lost a set in the tournament.

“Very happy to win this match today,” Hurkacz said in his on-court interview.

“I mean, Christian played pretty amazing throughout the whole tournament. He qualified here and had his best results on the ATP Tour.

“Especially after all he came through, all the surgeries, it’s really great for him. He played a really amazing match.”

The #AbuDhabiWTA final is set!

Elsewhere, at the Abu Dhabi WTA Women’s Tennis Open, Aryna Sabalenka is going in search of her third consecutive title when she takes on Veronika Kudermetova in the final on Wednesday.

Kudermetova will be taking part in her first WTA singles final after beating Marta Kostyuk 7-6 (10-8) 6-4 in her semi-final.

“We’re friendly, and I think it’s a really interesting and fun match,” Kudermetova said about the contest with Sabalenka. The last time that the two women met on court was on the ITF Challenger circuit in 2015!

The Antalya Open final will be contested between Alexander Bublik and the fourth seed Alex de Minaur, who booked his place there by beating David Goffin 6-4 3-6 6-2 in one hour and 52 minutes.

Australian Open could be pushed back by TWO weeks

Serena Williams makes no excuses for persistent struggles: ‘It’s like dating a guy you know sucks’